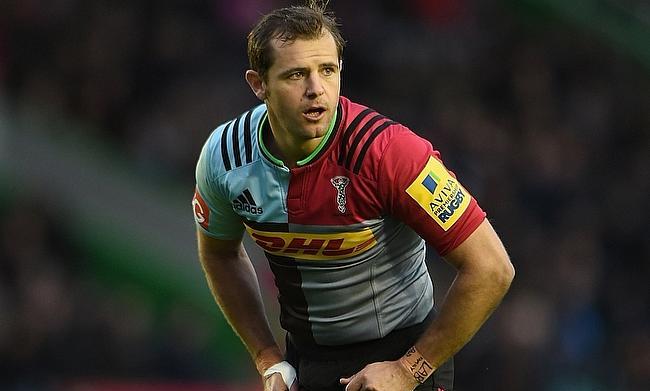 Ellis Genge: If we didn’t have pride when we were 11th, we wouldn’t have got to where we are now
Omar Mouneimne appointed new defence coach of Exeter Chiefs
England name five new players in 35-man training squad
Match Centre: Gallagher Premiership: Leicester Tigers 20-10 Wasps

Ahead of their Gallagher Premiership semi-final encounter with Saracens on Saturday afternoon, Harlequins attack and backs coach Nick Evans says that his team are outsiders again as they look to retain their title.

Quins are the only side from last season’s top four to make the playoffs this year and they will come up against their bitter London rivals in the first of the two knockout games that will take place this weekend.

Their efforts a season ago are likely to go down in folklore as one of the most mesmeric dashes to the domestic league title in history.

Placing fourth and without a head coach, the side overcame an early 28-0 deficit against table-toppers Bristol Bears to win the tie 43-36 after extra time at Ashton Gate.

Perhaps understandably, Evans jokes that he and his staff are looking to avoid a repeat of those sorts of scenes at the StoneX Stadium on Saturday and the 41-year-old is somewhat revelling in the fact that his team are underdogs once more.

“I don’t know if we are going to go 28-nil down we will be able to get that back against Sarries,” he said.

“Especially with the way they [Saracens] play and the quality that they have. We are aware of that. Last season was a bit of an anomaly around those two games [in both the semi-final against Bristol and the final against Exeter Chiefs].

“That’s something we have evolved in that game and looked at. What led to success last year ultimately hasn’t led us to where we are now.

“We have had to evolve, we’ve done that this season with a lot of our best players away with England, we’ve played in wet weather which we didn’t do last season, we have had injuries, whereas last season we were operating at around 85%, 90% available.

“We are really proud and excited that we have managed to work our way through the season. We’ve had to battle at times, we’ve had to eek games out.

“It has felt like we have gone under the radar. Everyone is talking about the Gloucester’s, the Leicester’s and the Sarries, we have just kind of chugged along and got ourselves to where we have wanted to be, and we will take a lot from last season, especially in big games and big moments.

“At the end of this season, we know how to close games out when we’ve had to and to come back when we have had to.

The final two rounds of Premiership action have shown the entire spectrum of what Harlequins could serve up at the weekend. In front of just shy of 50,000 fans at Twickenham last month, the side came back from 24-7 down against Gloucester to win 28-24 and secure their place in the post-season.

More recently, the current English champions experienced a 47-38 loss at Sandy Park to Exeter Chiefs as late converted Marcus Street and Sam Maunder tries consigned the visiting team to a defeat as they move into winner-takes-all rugby.

Coming into this game with Saracens, Harlequins will be going up against a side that has beaten them on three occasions this season in all competitions.

The most recent time that the teams went toe-to-toe was all the way back in February, three second half penalties from Alex Lozowski securing Mark McCall’s team a win after the two squads had been level at the break.

When it comes to Saracens, Tabai Matson’s team are up against a group of players that have bounced back from their enforced relegation in fine fashion.

Winning five Premiership titles in the past 11 years, the North Londoners could well add a sixth trophy to their overflowing cabinets and have the home tie that would support their stake in the race.

Back competing at the very top, with a rejigged squad that is only going to change further with continuing adjustments to the salary cap, it all adds up to a fascinating encounter between the two teams this weekend.

Evans and the rest of those that call the Twickenham Stoop home are now keen to prove that their exploits from last season were far from being a one off as they look to continue the defence of their crown.

“We are still probably not really spoken about as a team that can go and win it, which is great for us as it puts us in a situation like we were in last year,” Evans said.

“There is massive drive here, there is excitement around it and one of our big visions in the club is to be the most admired club in Europe. We are happy to put that out there, that is what we want to be, and the top teams have that ability to do that.

“For us to go back-to-back would certainly help us cement that vision. Not many teams do it. It’s a massive drive for us, but it is a drive for us to back up what we did last year and keep proving the doubters wrong and keep confirming this belief that what we are doing is right.

“It doesn’t ultimately mean that we are going to do it, but we have total belief that we can.”