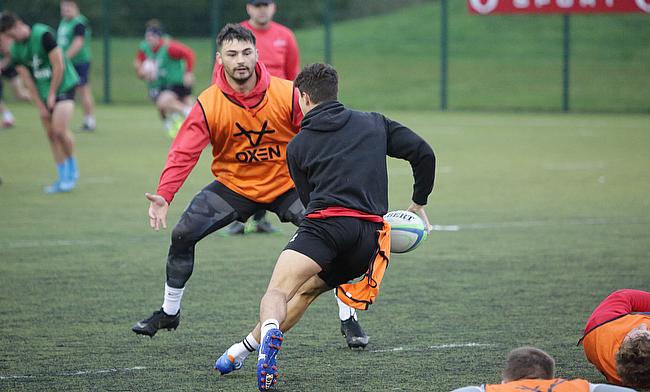 Exclusive: From Durham Uni to Bristol Bears - Fitz Harding
Exclusive: TRU Talks - BUCS Director of Delivery Jenny Morris
The roadmap for a return: How university teams are dealing with the coronavirus crisis
Harry Fry and Stephen Varney: Hartpury duo highlight the value of the student game

This time of the year is usually an exciting period for universities and their respective sports teams. The opening fixtures for the new season would have taken place, the ‘lively’ coach journeys home after an away match would have followed and the first of many Wednesday night celebrations would have ensued.

But that world seems far removed from what institutions up and down the country are currently experiencing, especially when it comes to rugby. “We just crack on in the best way we can,” says Manchester Met Head Coach Rob Jones.

The sport below the Gallagher Premiership and the Allianz Premier 15s has been at a standstill in England since March due to the Covid-19 pandemic. Last month, the RFU announced that no grass roots fixtures would take place until at least January 2021 because of the rising number of coronavirus cases as well as the additional government restrictions.

Of course, university rugby falls under that bracket but BUCS [British Universities and Colleges Sport] outlined their plans for the new season when the first outbreak of the virus hit the country. Their stance of introducing competitive fixtures in ‘Term Two’ – January to April 2021– has not wavered and given the challenges which society is facing each and every day, universities like Manchester Met are left with little choice but to operate their programmes within the guidelines.

It’s a week back for our @MMURUGBY @MMUSport student athletes.

One thing has become apparent to me this week, more than ever, it’s competitive and social sport that is going to give @ManMetUni @manmetuni_int students a reason to hang around through these very controlled times. pic.twitter.com/phWaVDcSIS

“The lads are still hungry and still want to be here because we have got a rugby programme which is developing them. They are getting a lot of their academic delivery online and even when we have had the odd rest day to just let everything breathe, we have provided online rugby sessions for them.

And for Jones and MMU in particular, their already difficult challenge seems to be getting tougher. Manchester has been hit hard by Covid-19 and the city’s recent spike in positive cases has reportedly been attributed to the student population.

Last week, 2,461 cases were recorded in Manchester and whilst the number of infections is worrying for the region and the leading universities, Jones says his players are taking responsibility for their actions.

“It has been incredibly hard for the students, but equally, if you talk to the students, the overriding factor is they would rather be at university than at home which shows that they are still enjoying their time here,” says Jones.

“Manchester has been in the spotlight because it is one of the worst infected areas with one of the largest student populations in the UK, but you have got people coming from all corners of the world so it is not rocket science, is it?

“The vast majority of students have been exemplary in their responsibilities, but some haven’t but that is probably the case in any part of society. I must say though, the communication from the athletes has just been on point and the message is safer than safe. What is absolutely clear is that there is no correlation between rugby training and positive tests. There is no indication it has come from anything to do with rugby so that is encouraging.”

Tests sites are available for MMU students on campus whilst on the rugby pitch, Jones’ players are training in bubbles. Despite the numerous challenges they are faced with - combined with the absence of competitive fixtures - Manchester Met have had their biggest intake of rugby players with 140 male players now involved whilst 35 female athletes

There was a great turn-out for yesterday's Freshers Rugby Trial.

Watched by the BUCS coaching team, the new arrivals were put through their paces.

We look forward to seeing these lads develop and, hopefully, some of them pushing for places in our @BUCSSuperRugby squad... ???? pic.twitter.com/n7hi2HFiZv

The positivity surrounding recruitment is also apparent at the top of the student game. Hartpury, three times winners of BUCS Super Rugby, have been encouraged by the number of players taking part in the sport during this period. Spread across five separate teams, new Head Coach Dan Murphy has 215 students training in bubbles.

“We are not doing any contact training at the moment but strangely, it is quite a good period,” Murphy told TRU. “Yes, there are a lot of restrictions, but I do see it as a positive in terms of upskilling our players. You get some players at some ages that just focus on their scrums and their lineouts, but you can upskill those players to make them more rounded because we have more time.

“There are restrictions and we have to adhere to them, but you can take this time and get something positive out of it.”

There is currently no crossover between the teams at Hartpury in order to reduce the risk of any Covid-19 transmission but the Gloucestershire-based university are maintaining a competitive edge in training, with teams taking part in Ready4Rugby style games.

The expectation is there will be some BUCS Super Rugby fixtures announced at the end of this month for 2021, but for now, Murphy’s attention is on his players and keeping them engaged as well as motivated.

“We are not testing at the moment, but we run track and traces so we keep an eye on each bubble when they are in training. We are very strict on that because what we don’t want is the whole thing to come crumbling down. We have put in lots of processes to keep it going. We do have good numbers in each squad so we want to keep it going for the majority so putting those procedures in helps to do that.”

The university are also adding 30 minutes of strenuous exercise to their sessions to raise money for former Hartpury star Sam Leeming, who has been diagnosed with cancer.

Leeming played an integral part in Hartpury’s unrivalled trophy haul since BUCS Super Rugby’s introduction and a number of their alumni have gone into the professional game after flourishing on the university stage.

Good afternoon all, Starting today, Myself, @danmurphy1 @will_crane2 and @harrywilson will be doing 30minutes of strenuous exercise every day until the Xmas. A very good friend of mine has recently been diagnosed with Cancer, as he is under-going pain and Chemo treatment Myself and anyone who wants to join will participate in 30minutes strenuous exercise until he has finished Chemo (22nd of December). The Link to donate towards a great cause and charity is in the bio. The training is on top of any rugby training we do.

Seb Negri (Italy and Treviso) and Harry Randall (Bristol Bears) are two of the standout names and even before the evolution of BUCS Super Rugby, Hartpury were still picking up silverware.

A player to do just that in 2014 was Alec Clarey, who recently joined Saracens following rugby’s restart.

For all the prop’s success with Hartpury as well as England Students, Clarey cannot dodge the reality which the current generation of university players are faced with. Like them, he wonders what comes next and the forward hopes the situation will improve over the next couple of months.

“University rugby is so important,” Clarey told TRU. “It changed me from a boy to a man. You have got a lot of people around who you can learn from so it was really positive for me and I reckon it excelled my rugby which I wouldn’t have got otherwise.

“Right now, it is important for unis to keep players engaged. It is tough for these students. There is a lot of negativity and unhappiness going around at the minute. These students have been given the short straw because the university days were some of the best of my life.

“Playing on a Wednesday, to coach journeys and going out after, they are all missing out on that aspect now so I do feel for them. They are missing out on some of the best days they will have playing the sport but fingers crossed it improves soon.”