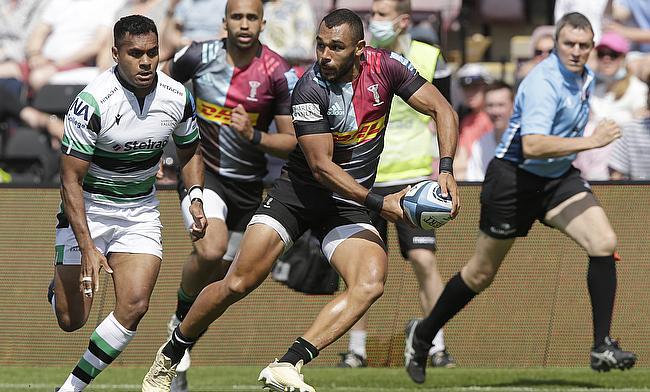 When Harlequins lifted the Premiership at the end of last June, it was perhaps one of the most miraculous and fascinating conclusions to a season in the history of the competition.

Playing the most enthralling style of the rugby, Quins came from behind in both the Premiership semi-final and final in order to lift the trophy. 28 points down to against Bristol Bears at one point and again left it late to beat Exeter Chiefs at Twickenham.

From the point that Paul Gustard left the Twickenham Stoop midseason, players and coached at the club discussed how they moved back to the ‘Quins DNA’. Playing heads up rugby, scoring tries almost at will, for the rest of the summer all the rugby that was played seem to pale in comparison.

Given the roller coaster of emotions that surrounded the club’s second Premiership title, how the club moves on from this point onwards is the biggest question. Joe Marchant is not only an Academy graduate, he played an important part in getting the club to the final.

Crossing the whitewash twice against Bristol in the comeback win, when asked the 25-year-old says that it took he and his teammates some time to come to terms with their achievement.

“It is a strange one,” Marchant told TRU, “because for a lot of us, I remember chatting to a lot of the boys. It didn’t really kick in for a long time that we actually went and won the Prem.

“It was something that all of us have all dreamed of. We all wanted to do it with a Quins badge on our chest, so for us doing it, it was just an amazing thing. You have just got to try and switch off a little bit afterwards and be like; ‘alright, a new season is coming, we need to be ready’.

“It comes around pretty quick and you don’t want to be hanging on to previous thoughts of previous years or anything. You need to be sure by that first game, when that first game comes, you are ready to kick on.”

The last time that Harlequins picked up the Premiership, it was all the way back in 2012 and there are still some at the club who remember what followed well. That title was in some ways, a major part of putting Bloodgate behind them and the year that followed their pure delight was a third-place domestic finish.

So, what are the incumbent champions objectives for this season?

“We’ve been looking for, in all our chats, about getting top four,” Marchant said. “Most years, in the last few years we have said that, but it is something we have really hit hard this year and just to carry on with the rugby we have been playing, playing with a smile on our face, really enjoying it and to be honest, if we are doing all of those things, then by the end of the season we will be in a good place, pushing for the play-offs.”

For months, we have gushed over the way that Quins went about their business. As the team who finished top of the pile, Marchant and the teammates have become the hunted and clubs have no doubt spent much of this offseason pouring over the team’s tape from the previous year.

Announced as the club’s new Head Coach less than a week after their big day at Twickenham, Tabai Matson is the man charged with developing the club further.

Leading a coaching group filled with talent, with Nick Evans, Adam Jones, Jerry Flannery and Charlie Mulchrone, Bath fans got a brief glimpse of what the 48-year-old can offer before he had to head home due to family reasons.

?? He gave them nightmares last time.

?? Will Tyrone Green be back to his old tricks at Kingston Park tomorrow? #COYQ pic.twitter.com/Feeh6XWfn9

In recent years, when coaches join new clubs, it is to help direct an upturn in form, but Matson’s task is arguably much harder. Maintaining the club’s position at the top of the table is going to be a challenge, with a hoard of teams looking to take the men in quarters down a peg or two.

Regardless of this fact, Matson as Marchant was, is steadfast in his messaging that the Quins way will continue, and the chasers will merely encourage the Londoners to get better.

“I think high performance sort, and the Premiership especially, is really pragmatic and once of the things Quins did amazing last year,” Matson said. “Their lineout was rock solid, their scrum at times won them the game and so there was still some pragmatic parts of the game that you have to be really good at if you want to even consider being successful.

“The style of play is really about ball in hand and your intent in certain parts of the field, and for me, it is easy to buy into that. Because I want to play positively, and you have got a group of players where their mindset is that.

“I will say it again, the context of the competition has changed, it is a very tough comp and teams will think ‘we can stop that’ and that will be our greatest challenge and that is fantastic, because the team will grow off the back of that.”

Their defence starts against Newcastle Falcons at Kingston Park on Sunday afternoon, where Alex Dombrandt will captain the team from No.8, Danny Care starts at scrum-half, Marchant starts at outside centre and as Marcus Smith is still on mandatory rest, Tommasso Allan starts at fly-half.