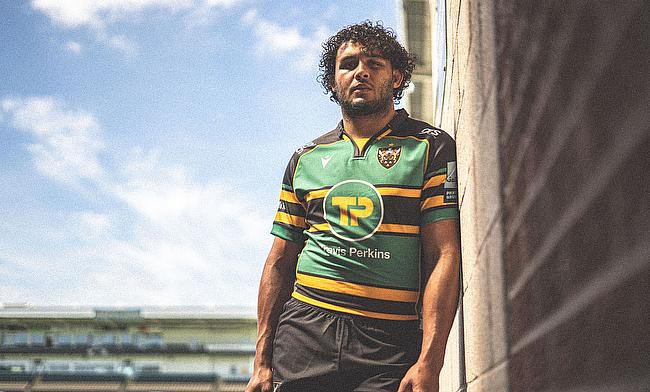 Northampton Saints announce new partnership with Loughborough University on women's rugby
Mike Haywood Exclusive: “I want the younger lads to experience that winning feeling at Northampton”
Northampton Saints’ David Ribbans: Sometimes you have just got to grind it out
England’s Willi Heinz and Lewis Ludlam know what it takes to overturn the odds

When Northampton Saints host Gloucester on Saturday afternoon, the 80 minutes will be about much more than just the Gallagher Premiership season getting underway.

For one, the lifting of Covid-19 restrictions means Franklin’s Gardens will be able to fully open its doors for the first time since February 2020, with swathes of spectators keen to see the black, green and gold back in action.

But the game will also be an extra special occasion for Lewis Ludlam.

Even if the England international wasn’t a professional rugby player, being able to watch Northampton in the flesh again is something he wouldn’t have missed for the world, but the 25-year-old is now set to lead out his boyhood side this weekend having recently been named the club’s new captain.

“It is an absolute honour to lead the boys out this season,” Ludlam tells TRU. “There have been a lot of highs and lows along the way, but something which has remained consistent is that I have always been a Saints fan no matter what. We [Ludlam’s family] have always watched the Saints so to just find myself in this position is a dream come true and something I am really thankful and excited for.”

Our Captain ??@LewisLudlam will lead Saints into the new season, having been named solo skipper for 2021/22.

When Ludlam discusses his role as skipper, his humble nature is unsurprising. In 2018, he was at crossroads due to a combination of injuries and competition for places. His future as a top-flight player was hanging in the balance.

However, a show of faith from Director of Rugby Chris Boyd has seen Ludlam firmly establish himself in the Saints squad and within the leadership group over the last three seasons.

“I try not to look back at the past as much as possible,” Ludlam says. “It [Ludlam’s journey] is something I am very proud of, though and I am thankful to Chris for giving me the opportunity.

“Before he came to Northampton, I played eight times for the club and for him to put that trust in me and to say if you are prepared to work hard, prepared to put it in, you will get your opportunity is amazing. For a coach to say that to you, it makes you want to work and do him proud. Boydy has been incredible for me.”

Ludlam was co-captain alongside the experienced Alex Waller last term, but he has now been given the opportunity to go solo. Was the ‘handing over of the baton’ process a simple question for the Saints boss to ask his new skipper?

“Boydy, as you know, is a pretty chilled out character! Ludlam laughs. “It was more of a ‘you fancy it?!’ I just bit his hand off for it and that was sort of the end of the conversation really!

“I think the fact he has asked me to do it probably speaks for itself. I want to do him proud and I want to show him I am worthy of the role as well. The boys have backed me and they have been really supportive as well so I don’t want to let them down either!”

Ludlam namechecks Waller as well as Tom Wood, Dan Biggar and Courtney Lawes as teammates who will certainly offer him advice and support during the campaign as the Saints aim to make a return to the Premiership’s top four.

Northampton’s attention will be very much on that goal with the new season beginning on Friday night but after a gruelling 2020/21 campaign, players up and down the country had some well-deserved time off over the summer with Ludlam visiting Croatia before enjoying a walking holiday in the Peak District with some of his Saints colleagues.

“It was nice to switch off for a couple of weeks,” Ludlam adds. “I managed to get out of the country which felt a bit weird! I think it was probably two years since we left the country for a holiday!

“A few of us lads also had a few days off together. We were feeling very old and got away to a walking holiday which makes a change from the Ibiza’s from a few years ago!”

Ludlam admits after two weeks of putting his feet up, he was ‘keen to get back to work again’ despite his season only finishing at the beginning of July following his two most recent appearances for England.

He came off the bench in both fixtures against the USA and Canada, but his selection in the summer was the first time the 25-year-old had been involved with the national side since February 2020.

“It has been a while since I had been in camp so to be able to take the learnings from playing at the World Cup and from previous games and go into what felt like a young group, a fresh group and show what I am about, was really good,” Ludlam says.

“It is probably one of the most enjoyable camps I have been in. I think a lot of the lads in that camp are at similar stages in our journey, similar ages, so we all got on well. It was a really good group of lads and to play two games at home at Twickenham in front of some fans after what felt like a really long time without it was a real boost.”

That immersion with England is something that seems to have relit Ludlam’s desire to work his way into Eddie Jones plans for the upcoming autumn internationals, but right now, his focus is purely on getting off to a positive start to the season on the domestic front.

The Saints eventually finished 14 points adrift of the top four last term and a lack of consistency was an underlying theme for Northampton throughout the 2020/21 campaign.

Their first win on the field didn’t come until Boxing Day and after seemingly sparking their season into life with victories away at Gloucester, Wasps and Exeter Chiefs, seven defeats from their last 12 league matches proved to be their downfall.

It is an aspect of the Saints’ game which Boyd and his charges have targeted during pre-season: “That is at the front of our minds and something we have talked about,” Ludlam says. “The most frustrating thing about last season was how we can go away to Exeter and put in a really good performance, but then lose narrowly at home for the next couple of weeks after that so consistency is something we know we need to work on.

“There are a lot of things which go into that, but we have pledged to each other that we will continue to target growth in that area. I think we have learnt a massive amount from it and we need to continue to learn. You saw last year that one or two bad games were the difference between a top-four spot so we can’t wait to get started for the season now.”

Ludlam refers to current Premiership champions, Harlequins, as an example of what can be achieved. The quarters won eight of their final 11 matches - a run that began with a victory over Northampton - to seal a place in the top four before they stormed to their first title since 2012.

For the Saints, their last appearance at Twickenham came seven years ago and they have only added two top-four finishes to their name since then. With a new era at Franklin’s Gardens beginning under the captaincy of Ludlam, can he lead his boyhood club back to past glories?

“Top four is the aim and as soon as you make top four, all options are on,” says Ludlam. “That is the exciting thing about the Premiership. It isn’t just about consistency, though. It is about consistency and being able to perform in big moments and that was something which Quins did really well last year.

“They picked up a good run of form in the second half of the season and then performed when it really counted despite going through a tough year so it is exciting to see that. Top four will be the aim for most teams because, like I say, when you get there, anything can happen.”