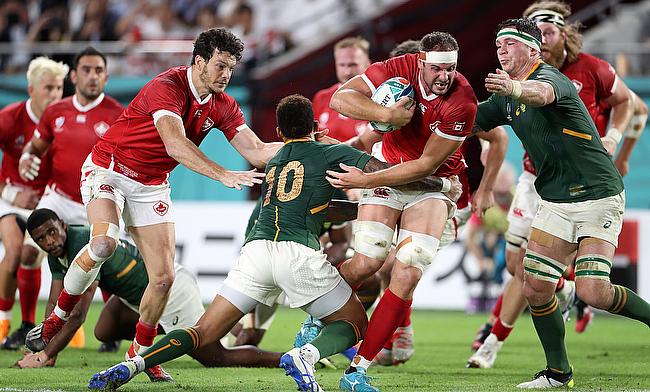 Since the start of the professional era, few Canadian players have pulled on the Barbarians shirt, but Tyler Ardron is the latest to do so.

Playing for the Chiefs in Super Rugby, Canada’s captain has been one of the nations’ most high-profile exports in recent years having played for the Ospreys for four seasons before moving to New Zealand.

Performing admirably alongside the likes of Brodie Retallick, Sam Cane and Luke Jacobson, the Canadian will be going back for a third season of Super Rugby action.

Now preparing for his first experience of Barbarians life, Ardron will be doing the whole tour this autumn before returning to Hamilton.

“It’s been something that I’ve actually wanted to do for a while and if I ever had the opportunity, I always said I would,” Ardron started. It’s a pretty exciting brand of rugby, so it’s just a real honour.

“There’s not a lot of Canadians that have been able to put on the BaaBaas shirt, especially since the professional era, they’ve kind of missed out. So, just to rub shoulders with some of the best players in the world and rooming with a guy like Rory (Best) who is calling time on his career is pretty special.”

Joining the likes of Gareth Rees and Al Charron in donning the black and white hoops, Ardron says that he is immensely proud to be representing Canada over the next three weeks, hoping that more will do so in the future.

“We probably had that era when Al Charron and Gareth Rees were coming through and Canadians were getting a little bit more of a look,” Ardron said. “It kind of goes to show where Canadian rugby is at right now.

“It’s definitely not in the top tier of international rugby, so it is understandable, but hopefully we can keep putting the Canadian flag out there, get some more guys signing professional contracts and then hopefully in the future we get a few more guys on these tours.”

Before professionalism in 1995, Canada was regarded as one of the top teams in World Rugby. Reaching the quarter-finals stage in 1991, the likes of Rees, Charron and the late Norm Hadley proceeded to play top flight domestic rugby in England, with both Rees and Charron playing professionally at one stage.

The only tier two nation to have made each edition of the biggest tournament in the game, Canada sit on the World Rugby council. Regardless of a rich rugby history, it was very much touch and go as to whether the nation would qualify for the latest World Cup.

I believe he lives with All Black’s openside Same Cane.

Shame Sam isn’t playing, perfect opportunity for both to air frustrations about dishes being unwashed.

After numerous failed qualification attempts both before and during the leadership of Kingsley Jones, the Canucks eventually guaranteed their place in Japan by winning a repechage tournament in Marseilles last year.

However, qualification was just half of the battle. Drawn in the same pool as eventual winners South Africa, three times champions New Zealand and Italy, it was never going to be an easy task. Losing each of these games emphatically, the cancelled game against Namibia earnt Ardron’s side their only points of the tournament.

Despite their poor results, there were positives to take. It was the first time that Canada’s squad had, for the most part, been professional with only Gordon McRorie and Nick Blevins not having been in a full-time environment.

It’s the Toronto Arrows that are to thank for that momentum shift, with Ardron quick to recognise the benefits Major League Rugby can have.

“I think having those guys in a professional environment is huge and it is going to pay off, but it is the quality of rugby that needs to go up,” Ardron explained.

“You’ve got guys like [Mathieu] Bastareaud that are heading over there this year and after talking to him, I know he’s pretty excited to get stuck in.

The big man goes for the line! @RugbyCanada's captain Tyler Ardron intercepts and goes the length of the pitch to score at #PNC2019 pic.twitter.com/7u3uMQDlO2

“You get a few of those guys in each team, the level of rugby will go up. The professionalism is already starting to come and we are able to train a little harder. It might be closing the gap a little bit on the nations ahead of us, but they are also improving every year, so we have to improve more than they do every year if we are ever going to catch up.”

With potential changes to the international calendar planned by World Rugby, fans could be seeing more of Ardron in a red jersey. Made unavailable due to clashing club and country commitments, Ardron could be coming up against next week’s opponent, Brazil, regularly over the next few years.

“I haven’t had the privilege of playing them yet, but I think that the structure is changing with the international fixtures for Canada and I think a lot of the guys playing overseas will be coming back for those games. It’s probably a country that I’m going to have to get more familiar with.”

Ardron will be playing in the second row for Eddie Jones’ Barbarians alongside Australian Luke Jones.

Danny Care returns to England squad for clash against Barbarians