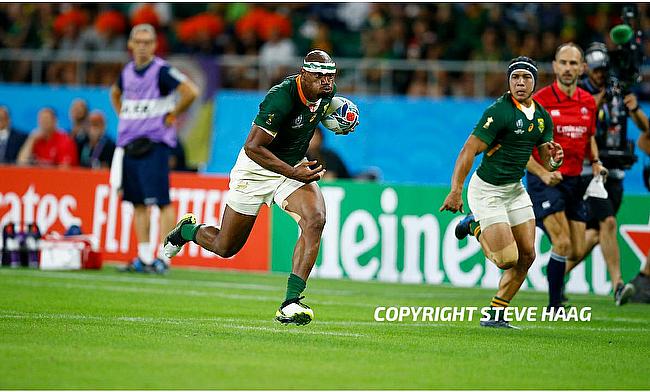 Hosts Japan have being knocked out of the Rugby World Cup after losing 14-3 to South Africa in Tokyo. Joe Harvey has his say as the Springboks advance to the semi-finals against Wales.

Tokyo. Japan’s capital city had been waiting all week for their Brave Blossoms to grace the field of the Tokyo Stadium. The world was watching as South Africa overcame a stern first half test to beat the hosts 26-3.

The first half was a fairly hard-fought affair. Both sides came flying out of the gates with Japan displaying good attacking prowess and South Africa good defence. Pinning Japan into their half, South Africa drew first blood through a Makazole Mapimpi try from the back of a scrum. Handre Pollard could not convert the score from the touchline.

Not long after, Japan really sprung into life, playing some of their trademark attacking rugby and their endeavour was soon rewarded.

Bok loosehead Tendai Mtawarira was sinbinned after taking his opposite number over the horizontal and deservedly received yellow. Japan, unfortunately, couldn’t make the most of their man advantage, their only points coming as a result of a Yu Tamura penalty in what was a relatively subdued first half for the fly-half.

The rest of the half was a case of near misses for the Springboks. South Africa found themselves over the line twice, but were called back on both occasions, leaving the score at 5-3 going into the break.

Rassie Erasmus must not have been pleased with what he saw from South Africa and wanted them to start taking the points when available. This could be seen in the first 10 minutes of the second period when Handre Pollard kicked two penalties to nudge South Africa further ahead.Some performance from Faf de Klerk.

?? "We got one or two runaway tries. The margin at the end was not a true reflection. "

Hear from @Springboks coach, Rassie Erasmus after his team overpowered the hosts in a compelling and competitive clash #RWC2019 #JPNvRSA #WebbEllisCup #RWCTokyo pic.twitter.com/tT7ooc77eV

Pollard then missed a kickable penalty some minutes later after South Africa’s dominance at the scrum continued to give the Boks convertible chances in opposition territory.

Less than five minutes later, Pollard did kick a penalty after a high tackle on Faf de Klerk.

Late in the first half, South Africa had begun to get a lot of joy from the driving maul. And in the second 40, it eventually it paid dividends as De Klerk peeled off the back of his maul to dive over the whitewash. Pollard converted the score to give South Africa a commanding 21-3 lead with less than 15 minutes to play.

After turning the ball over, South Africa scored another try. Willie le Roux delivered a fantastic pass to Mapimpi who withstood Kotaro Matsushima’s challenge to dot down.

Pollard was unable to convert, but by this stage, South Africa were in complete control. South Africa did look good for another score, but in an act of final defiance, Japan would not allow it as the hosts bowed out of their own World Cup.

Japan have certainly had plenty of superlatives thrown at them this Rugby World Cup. Jamie Joseph has had his side playing a brilliant brand of rugby that has not only captivated Japan, but the world. This was the case in this game too.

When the home nation were in full-flight, they were untouchable. The ball was moved too quickly for South Africa, who had to rely a lot on scramble defence to clear things up. We also saw a variation from Japan too, who kicked the ball much more, something that has not been seen in their game this tournament.

A big flaw in this quarter-final for Japan was the set-piece. Standing up so well to Scotland and Ireland, the scrum and lineout was fairly poor. Shota Horie failed to find the target on many occasions, giving South Africa a platform to attack from.

Four years ago, this Japan side was disappointed not to exit the pool stages, but they can of course be delighted with how this tournament has gone. Beating Scotland and Ireland in Pool A, this might just have been as far as the side could go. Regardless, Japan are becoming the new force in international rugby.

A lot of talk coming into this fixture was the unique brand of defence that South Africa had deployed for their campaign in Japan. Extremely well organised, South Africa weren’t terrifically well disciplined in the first half and probably should have had more points scored against them.

It was the second half when South Africa began to be clinical. Rassie Erasmus was clearly disappointed with just a two-point lead going into the break and you saw South Africa kick three penalties, missing one, within 20 minutes of the restart.

In many ways this game was a battle of the little men. Japan have their men, but South Africa have the likes of Cheslin Kolbe and Faf de Klerk in their ranks. De Klerk had the better game of the two, kicking for territory excellently and delivering reliable ball to stay on the front foot.

What South Africa did particularly well was target the ruck. With Japan committing only two men at a time and South Africa’s preference to physical dominance, the likes of Pieter-Steph du Toit, Siya Kolisi and Francois Louw had a field day garnering some 10 turnovers in the game.