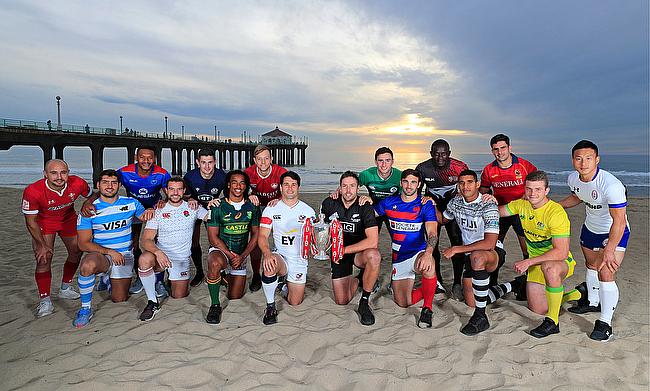 It has been nearly a month since the last leg of the Sevens World Series. Last time it was Sydney and this weekend we will see this leg of the men’s World Series take place in Los Angeles, California.

Joe Harvey caught up with HSBC World Series commentator and California resident, Dallen Stanford, to preview the latest leg of the World Series, as well as to discuss the postponement of the Asia legs of the World Series until after the Olympic Games in Tokyo due to concerns surrounding the Coronavirus.

“World Rugby has demonstrated during the 2019 Rugby World Cup and now, on the HSBC Sevens World Series, that safety for spectators and players is their first priority,” Stanford said, “Whilst it is not ideal that the Series will now finish in October, it is definitely the right decision.”

Headed up by the champions in Sydney, Fiji, this is arguably one of the most open pools at the tournament. Not only Fiji’s first win of this season, it was their first podium. In comparison, France have had two so far this year and have been extremely consistent.

“Fiji are one of the favourites to watch for a reason,” Stanford said, “So much class with unexpected casual brilliance. They have boasted the highest number of tackles per match throughout the season, showing that they are not just experts in attack and I expect them to be red hot in Los Angeles!”

Fiji and France are joined in Pool A by Argentina, who have been impressive despite a disappointing eighth place finish in Sydney, and a Korea side who will be making their first appearance on the World Series this season.

Runners-up in Australia, South Africa returned to their good form in the last leg of the World Series. Finishing 10th at home, it really was a quite dramatic improvement by a side that has dominated the Series, virtually since its inception. Still missing players due to their selection for South Africa’s various Super Rugby franchise’s, Stanford expects the country of his birth to fare well this weekend.

“The Blitzboks have tremendous depth and their coach, Neil Powell, has known for a while that many of his superstars will be playing Super Rugby, which is why he has brought another strong squad to Los Angeles,” Stanford said, “Another top four finish is on the cards for South Africa.”

The rest of Pool B is made up by Ireland, who have adjusted to life as a full-time side on the Series extremely well, a Canada team looking to pick up form ahead of their home leg next weekend and a Kenya side, who despite a bright start this year, have fallen off in recent legs.

Ahead of their home stage, the USA finished third overall in Australia, meaning that they head up this group of four. Last year the side went into their home leg as the side leading the World Series, but this year are sixth overall, their only podium thus far on the Series that third place play-off in New South Wales.

No doubt going to have plenty of home support in LA, Stanford says that the side will be extremely motivated to keep up their good record of winning on home soil;

“The Eagles are defending their 2018 and 2019 USA Sevens titles,” Stanford explained, “They have also featured in the semi-final stages in 2015, 2016 and 2017. Playing at home is always inspiring and I expect a massive showing from the boys in red, white and blue.

“While this season has not delivered what we saw from them last year, there is plenty of rugby left to elevate themselves onto the podium.”

Mike Friday’s USA are joined by Australia, Scotland and Samoa in their pool. Each of these sides can possess a threat to the Eagles, but with a heavy home advantage in California, it can e expected that the home players will be more than up for a fight.

England are actually seeded ahead of World Series leaders New Zealand at the head of Pool D. Losing their bronze play-off game to the USA in Sydney, James Rodwell’s team come into this tournament only having lost Ollie Lindsay-Hague to injury. Apart from the half-back, England have a fairly strong squad an will hope that they progress from a tasty pool.

“England have been very consistent this season given that they have had a few key injuries,” Stanford said, “This tournament will be very difficult for them, facing New Zealand in their pool. My prediction is that they will have to take on Fiji in the quarter-finals.”

As Stanford said, it is no easy challenge being pooled with New Zealand. Having made the podium each of the opening three legs of the World Series prior to Sydney, New Zealand still sit nine points at the top of the table after finishing fifth overall in Australia, a week on from winning their home leg in Hamilton.

“One can never rest on their laurels in this game. What Sydney showed us, is that while the All Black 7s are Series leaders, we have had three different Cup champions in four tournaments,” Stanford said, “New Zealand will be fantastic gain this weekend, with a lot depending on if they face a rampant South Africa in the semi-finals.”

England and New Zealand are joined in Pool D with bottom of the pack Wales, who will be feeling like they have to prove themselves on the West Coast, and a Spain team that have quietly gone about their business, consolidating themselves as one of the World Series’ most consistent sides.