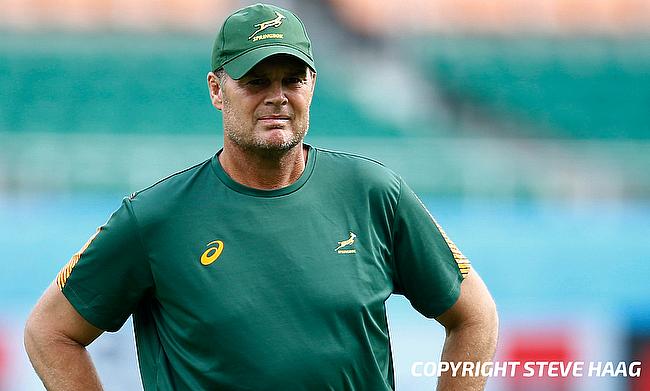 World Rugby has been reported to have expressed disappointment over the comments from South Africa director of rugby Rassie Erasmus on his recent hour-long video.

In a video that lasted about 62 minutes, Erasmus targetted the match officials in the first Test especially referee Nic Berry listing out the decisions that went against the Springboks as they succumbed to a 17-22 defeat.

The 48-year-old, who guided Springboks to a World Cup triumph in 2019 said the video was recorded on a personal note and the South African management was not involved with it. He even offered to step away from the remainder of the series against the Lions while addressing World Rugby’s head of referees Joel Jutge and director of rugby Joe Schmidt.

“World Rugby notes the comments made by Rassie Erasmus. The nature of these will be raised with the union via the usual official channels and no further comment will be made at this stage,” read a statement from the governing body.

During the video, Erasmus also accused Berry of treating both Siya Kolisi and Alun Wyn Jones differently and slammed Lions head coach Warren Gatland for opposing the appointment of Marius Jonker as TMO.

“We definitely felt that the way things unfolded on the field, didn’t benefit us by staying quiet,” he added.

“In my position as director of rugby, if this means I step away from being water carrier, that is fine.

“If this means I get a fine I will step away from the management team. If this means the Springboks will be in trouble I will say I did this in isolation.

“If you think this was going over the top and it shouldn’t go out to the media, I did this in a personal capacity and not as part of the Springboks.

“It is me personally that did this because I believe in fairness. I believe two teams must have equal chance of competing in a match.

“I am not saying the referee was a cheat at all. I am saying we just wanted clarity on a Sunday night which we have now got on a Tuesday.

“I am not very convinced with the clarity with what we got from Nic Berry in this match.

“Let the Springboks and the Lions have equal chance on the field when it comes to laws, respect and the way players get treated.”

The second Test will be played in Cape Town on Saturday.