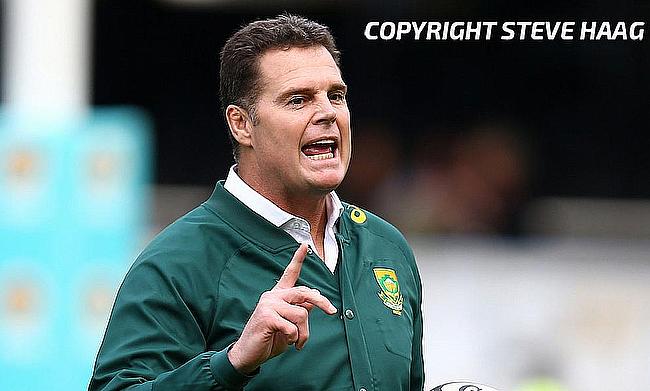 Lukhanyo Am warns Lions of physical battle in second Test
Lee Mears Column: 'Being 1-0 up is huge but as we saw in 2009, the brutality will go up another level'
Coolness personified - Jack Conan seizing his Lions opportunity
‘They are going to be desperate’ – Warren Gatland and Chris Harris ahead of the second Test

South Africa Director of Rugby Rassie Erasmus has continued to put the match officials for the British and Irish Lions Tests under pressure after recording a remarkable hour-long video.

Erasmus’ antics on social media to highlight ‘errors’ made by the officials during the Springboks’ 22-17 defeat against the Lions has been the narrative which has dominated the build-up to Saturday’s second Test, but South Africa’s DoR decided to go one step further on Thursday morning.

In the 62-minute video monologue, Erasmus listed an array of decisions that he thinks went against the world champions in last weekend’s first Test and he also accused referee Nic Berry of showing Lions skipper Alun Wyn Jones far more respect than Springboks captain Siya Kolisi throughout the game.

Despite sitting in South African rugby merchandise, Erasmus stated he recorded the video in a ‘personal capacity' and not as part of the Springboks whilst also revealing he would “remove himself” from the management team.

World Rugby have said they are reviewing the footage.

"The Lions only comes around every 12 years and I think it should be fair that I'll step away from these last two Test matches," Erasmus said.

“If this [video] causes that I’m not allowed to be water carrier, that’s fine, I’ll step away. If we’re going to get a fine, I’ll step away from the management team. If this means the Springboks will get in trouble, I’ll say I did this personally because I believe in fairness.

“Let the Springboks and the Lions have an equal chance on the field when it comes to laws, respect, the way players are treated, what is said in the coaches' pre-match meeting with the referees, how they give feedback post-match and how things are said in the media.

Before the first Test, the officials were thrust into the spotlight after the Lions were unhappy with the appointment of South African TMO Marius Jonker.

Lions boss Warren Gatland also highlighted a head-to-head collision between Faf de Klerk and Josh Navidi in the warm-up match against South Africa 'A', for which the Boks scrum-half received a yellow card.

“We felt things didn’t benefit us on the field from staying quiet," Erasmus continued. "I think where things for us got cluttered and frustrating was when the Lions started moaning about officiating on the field."

Earlier in the week, Erasmus also mentioned the referee for Saturday’s second Test, Ben O’Keefe, who is a New Zealander just like Gatland: “Warren talked last week about Marius Jonker. Warren is a great guy. I’ll tell you straight up, I always enjoy his company, he’s a good man, but it was weird for me that people would question Marius’s integrity.