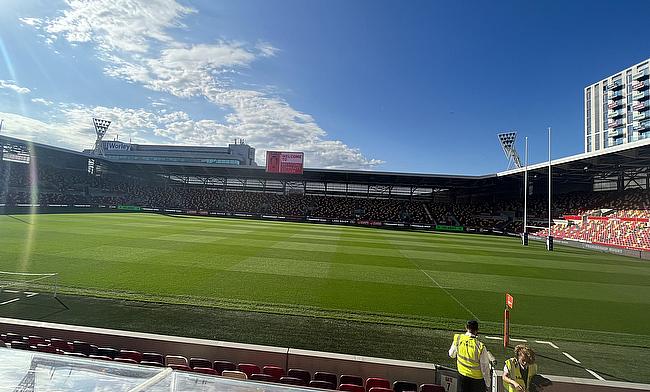 At the Brentford Community Stadium, Worcester Warriors lifted the Premeirship Rugby Cup following a 25-25 draw in London, the West Midlanders crowned champions having scored three tries to the Exiles’ one, after 80 minutes and extra time.

When it comes to balmy early summer nights go, the Premiership Rugby Cup final in West London was certainly an enjoyable one. Despite it being a Tuesday, fans of both clubs made their way to the home of the Exiles.

Neither teams have trophy cabinets laden with successes of yesteryear, London Irish were aiming to lift a first major trophy since the 2001/02 Powergen Cup, whilst Worcester’s last significant achievement was promotion from the Championship in 2014/15.

To begin with, it was all London Irish, with back-to-back early penalties given up by Warriors resulting in a penalty kick for Paddy Jackson. The men from the West Midlands soon responded after their slow start, a place kick from Fin Smith followed up by a try for Matt Kvesic.

The former England back-row pounced upon some lacklustre home defence, picking the ball from the base of the ruck and scoring under the posts.

Each kicker would knock another one over before Ben ‘snake hips’ White benefitted from Joe Batley leaving too much space for the scrum-half to make his way over the whitewash.

??? Hang it in the louvre. pic.twitter.com/WtQcyunNN1

Jackson’s resulting conversion levelled the score, the former Ireland international giving his team a lead for a time, before Worcester took a half-time lead with a Perry Humphreys try with the clock in the red, the visiting side occupying their hosts on one side of the field before spreading play to the left wing.

Worcester’s chance of continuing where they left off were dulled with a Ted Hill try that was ruled out for a Francois Venter knock-on in the play which preceded the skipper’s nearly-score.

From that point on, Worcester hardly looked like scoring, the momentum having swung in completely the opposite direction of Steve Diamond’s side.

Leaking penalties at the scrum, breakdown and being marched back on four occasions during the game, with Paddy Jackson slotting three consecutive kicks to give the home team a seven point lead.

Should Jackson of kicked a fourth penalty, the final moments may have been a more relaxed conclusion, with Worcester camping themselves in the Irish 22m.

Eventually this pressure paid in dividends, as Kyle Hatherell drove over the try line and Fin Smith levelling the score in the final play of the 80 minutes, meaning it was extra time in Brentford.

In extra time, Irish were again left ruing missed kicks. Jackson missing three penalties in the extra 20 minutes after his forwards put him in fairly good real estate to knock the ball over from kickable positions.

In the end, the game was won by the rules of extra time, which was that if the scores were still level after it had come to an end, the team that scored the most tries would be victors.

"Worcester are no longer a soft touch moving forward"

A special night for Steve Diamond who wins back-to-back #PremRugbyCup finals ??@WorcsWarriors fans can look forward to a bright future ahead ?? pic.twitter.com/r6CRHCrphM

In the final play, Warriors dug deep to turnover the ball at the scrum, Fin Smith kicking the ball into touch to begin the club’s celebrations.

His squad is celebrating behind him, the jubilation of a trophy that at times looked unlikely across the game, clear for all to see.

The question was a simple one; could Worcester mirror the achievements of Saracens or Exeter Chiefs after their own domestic cup competition wins.

For those teams, it seemed as though through winning the LV= Cup, it was the first domino in a continuous spell of dominance for the two teams, with Premiership and European titles following in the years that followed.

Diamond is also a coach to have won consecutive Premiership Rugby Cups, after winning the competition in 2020, and knows he has a job on his hands at Sixways.

With numerous senior players departing, as well as an influx of what the 54-year-old describes as “10 hard-working lads”, it seems like never before someone has a firm hand on the tiller.

Throughout the campaign, Warriors have utilised over 50 players on their way to the Brentford Community Stadium, where over 1,500 fans made their way midweek to support the club.

It is a support that was in some ways unexpected on the face of it, the incoming Director of Rugby of the belief that through picking up silverware, it can help progress the side in the long term, especially with full support behind them/

“They were fantastic,” Diamond said. “I think, to be fair, they have always shown massive support when I have been involved, and pre that.

Then came the captain. At 21 Ted Hill was named as GJ van Velze’s successor as the team’s leader, putting out a captain’s performance in the final to back up his credentials.

Now 23, Hill is a key part of Diamond’s rebuild, no doubt maintaining his captaincy for the foreseeable future, and even if not would be part of the leadership group long-term.

An Academy product, born in Worcester, the England international was honest about his team’s performance, but was also quick to point out that in the end, shortcomings meant little, the medal draped over his neck testament to which.

“It is hard to find the words,” he said. “We had a really good, solid first half. But, Irish are a tough team and you have seen that throughout the whole Premiership campaign, the European stuff, a real tough team.

“We knew they would come back. It wasn’t perfect from us by any means, penalties galore, but one thing you can never fault about this squad is our fight.

“We weigh ourselves on that, we went back on that today, and thankfully, we came away with a result.”