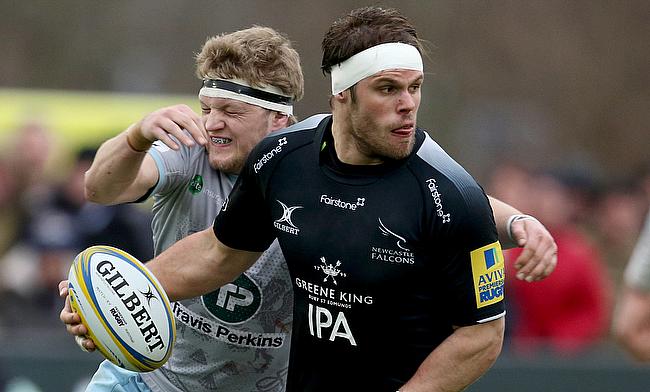 Newcastle skipper Will Welch praised the Falcons' defensive performance after their vital 13-6 win over London Irish in the Aviva Premiership basement battle at Kingston Park.

The victory opens up a seven-point gap between Newcastle and bottom side London Irish with Marcus Watson's first-half breakaway try proving to be decisive.

"Our defensive commitment was outstanding," said back rower Welch. "We'll take a win like that in any circumstances at this stage of the season.

"We knew London Irish would throw everything at us and they did.

"Our discipline was excellent and we clawed it back under difficult conditions. We were under the pump for about 25 minutes and we kept our composure.

"The performance doesn't really matter in the slightest, it's the result that does matter - the boys deserve a few beers tonight, but then we'll get back on the horse and we have two games left - we have to keep our focus."

There is little chance of Newcastle being allowed to relax with Saracens and Sale their opponents in their final games - director of rugby Dean Richards will see to that.

"The job is not done yet," said Richards. "We talked about it after the final whistle and there will be no letting up in the last two games of the season.

"We were the best of two bad sides today and it was disappointing to score only one try, but we didn't let them score any and our defence and discipline, especially in the last 25 minutes, was outstanding.

"If you play badly and win, you have to take it and London Irish are not an easy side to crack and they have been playing well in recent weeks.

"Mathematically, safety is not there. We just have to make sure it is in the last two games."

The Exiles dominated possession for much of the second half but Newcastle's defence was impressive to send the Falcons fans home happy.

London Irish head coach Tom Coventry said: "We created a lot but weren't able to finish which is sign of where we are at the moment.

"It's not a hopeless situation, but we have to beat two very good teams now to have any chance of surviving."