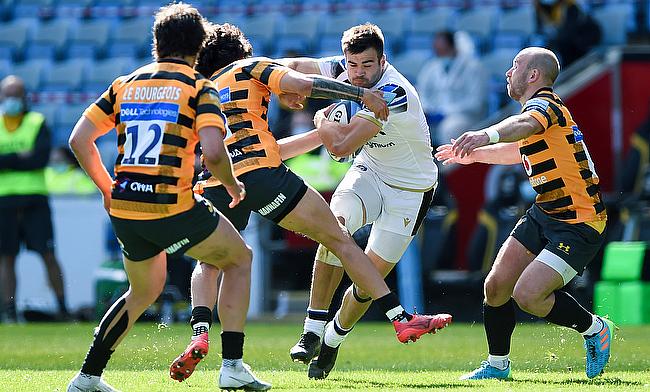 Will Muir will make his European debut this weekend
©Onside Images

Considering Will Muir’s recent Instagram posts have been populated with the emoji of a horse, it is perhaps unsurprising to see his name on Zoom follow suit.

“Does it say that?” he laughs when we first login to the call. “I think the horse is going to follow me around for the rest of my life now. There is no shaking it off!”

Muir was given the nickname ‘The Horse’ during his time in the England Sevens set-up due to the long strides he takes when he ‘gallops’ down the wing, and it is a tag that has gathered momentum since he moved to Bath last summer.

The 25-year-old smiles at the reference and in truth, he has every reason to be upbeat. After a difficult period in his rugby career, Muir is now beginning to flourish for the Blue, Black and White.

The understandable disappointment of finding out the Rugby Football Union were scrapping the men’s and women’s Sevens programmes last August would have been tough to take for Muir, but his transition to the Gallagher Premiership has sparked into life.

Muir was only able to make his debut for Bath in February, with injuries halting the new chapter in his career, but since then, he has helped himself to five tries for Stuart Hooper’s side.

“Obviously the Sevens stuff was tough news, but at the same time, everyone around you was receiving tough news as well,” Muir tells TRU.

“It was just something we had to deal with and thankfully there is some funding to get the Great Britain team together to give them the best possible shot they can have going into the Olympics this summer so that is great to see.

“I guess I was quite fortunate. A lot of lads that didn’t manage to get a XVs contract were just trying to do their home training and were hoping the Sevens would kick up again so I was one of the fortunate ones to be able to be playing rugby through those times of uncertainty.

“Until that GB set-up started coming together, there were a lot of lads thinking it was a dead end and it was quite a dark time for them, but at least there are now these opportunities of the training camps building into the Olympics.

“I know I keep saying it, but I am grateful for the opportunity I’ve got. I am definitely still learning so much here. I am trying to review and get as much out of every game as possible at the moment.”

Each day, Muir has been focused on making improvements at Bath, but the Olympic dream is still alive for him despite pouring all his time and energy into the Premiership club.

The former England Sevens Player of the Year has been named in Team GB’s 21-man training squad for Tokyo, but his XVs commitments are currently the priority.

“If we could work something out so I could chase that Olympic dream that I have had for the last two or three years, then that will unfold in due time,” he says. "Like I say, I’m just trying to nail all my reviews and learn as much as I can in the XVs game.”

And Bath seems like the perfect environment for Muir to continue his development.

“It definitely is!” he admits. "The likes of Roko [Semesa Rokoduguni], who I don’t think people know how many years he has played at this level for, he has got so much knowledge and you have just got to be like a sponge and absorb as much as you can from guys like him along with lads like Anthony Watson because it is invaluable.

“The more you can sort of use them to help develop your own game, it does give you that stepping stone.”

https://t.co/2wjGZaiQSG@EnglandRugby have high hopes for the #RWC7s...

And one player in particular is hoping to continue his rise in San Francisco. pic.twitter.com/bFNM7FFTEL

A familiar face who also helped Muir settle into his new surroundings was Ruaridh McConnochie.

The 29-year-old is proving the switch from Sevens can be a successful transition after representing England in the 2019 Rugby World Cup, and Muir has enjoyed learning some of the finer details of the XV-a-side game under the tutelage of his good friend.

“With Ruaridh, specifically all the aerial stuff with Sevens was mainly overhead and he sort of pushed my development of getting up and getting that basket catch off box kicks and things like that so he has been great,” Muir says.

“He has obviously gone down the same path I am on and he paved the way, really. He sort of understood what was going to be difficult coming from the Sevens game to try and adapt to.

“I think it actually shows that it is a good pathway. You see a lot of countries like New Zealand using the Sevens as a big feeder into their XVs game. I think the likes of Ruaridh, Marcus Watson, Alex Gray, they are sort of proving it is a very viable pathway.”

Another fruitful route that Muir is keen to bang the drum about is university rugby. The 25-year-old is one of a growing list of players to have earnt a professional contract in the game following their time in the BUCS [British Universities & Colleges Sport] leagues.

“My debut against Harlequins, you obviously had guys like [Alex] Dombrandt and Luke Northmore [Cardiff Met] so people I have some familiarity playing against at university level,” the Northumbria graduate says.

“George Wacokecoke, who was on my team at Northumbria, is getting his shot at [Newcastle] Falcons which is great to see and it just shows how good the BUCS league is to lay the foundations of becoming a rugby player.

“I think Bath put a massive emphasis on how much of a pathway university rugby is as well and just the opportunities it brings you to be a professional rugby player whilst getting your degree is pretty priceless, really.”

After reflecting on his journey in the game, Muir now turns his attention to the here and now with Bath as the Blue, Black and White prepare for one of the biggest fixtures in their recent history.

On Saturday, they welcome Montpellier to the Rec in the Challenge Cup semi-final as Hooper’s men target their first piece of silverware for 13 years.

Bath come into their last-four clash on the back of a deflating 39-29 defeat against Wasps on Sunday, but the messages from some of the senior players throughout the week has lit the fuse for this European encounter.

?? Your Bath Rugby team for the @ERChallengeCup semi-final...

Congratulations to Sam Underhill on his 50th appearance ?????? and to @Willmuir5 on his European debut!

“You hear the likes of Tom Dunn and lads that have been around for many years now and their hunger and their emphasis they are putting on the game shows how big Saturday is for the club,” adds Muir, who will make his European debut this weekend.

“Tom made a bit of a speech which was inspiring because of how much it meant to him. It has been 13 years since their last trophy so there is that big hunger and drive from him and the others to be able to get into that final and get something that is overdue because they are all desperate for that.

“I think that pulls everyone else’s excitement up and leads us into the weekend really wanting to get into the final. Everyone knows how big of an opportunity it is.”

For Muir, representing England in the World Sevens Series is a big stage in itself, but getting past Montpellier on Saturday night is the next furlong ‘The Horse’ is relishing in his career.

“My hunger for a shot in the final is as extreme as anyone’s here. We are all sort of bouncing off each other and there has been a good buzz through training. I think it is that communal hunger for the same goal.”