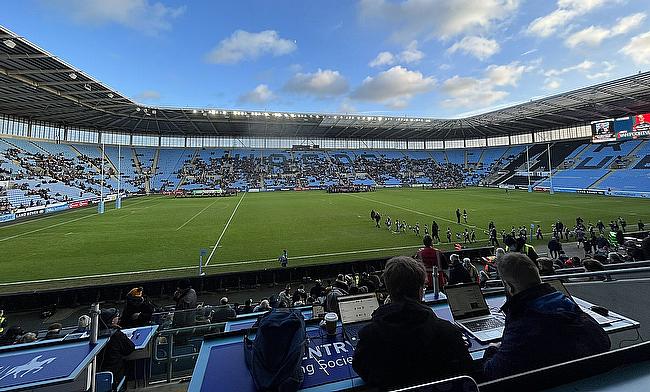 Steve Borthwick said his team had “plenty of opportunities” to beat Wasps as the current Gallagher Premiership leaders experienced defeat for the first time this season.

The encounter wasn’t without incident, with two yellow cards brandished in the first half alone. They were seen at the opposite ends of the opening 40 minutes, Tommy Reffell’s infringement leading to Wasps’ opening score.

Following a period of kick-tennis, Sam Wolstenholme’s clearance deflected off a Leicester shoulder, meaning that the men in black were all onside. Brad Shields led the charge, before Tom Cruse took charge of proceedings.

Five meters out, the hooker was felled and the move seemingly coming to a close. It was only upon further inspection that Tigers’ Reffell was seen taking out Elliott Stooke off the ball, the rangy lock the natural next port of call should Cruse have been able to get the ball away.

Tom Foley duly awarded the penalty try, giving the hosts a lead which they gallantly fought for. Tigers showed why they are top of the Gallagher Premiership tree, constantly probing for space and territory whenever they could.

Two penalties would follow, as would a disallowed try when Freddie Steward was deemed to have blocked a tackler, Steve Borthwick’s team contending firmly. George Ford missed two penalties thereafter, letting the West Midlanders off the hook.

As the halfway point approached, Tigers would translate their supremacy on the field to the scoreboard. Opting to maul, the resulting phases eventually led to Julian Montoya scoring, the Argentina hooker bundling over as he so often does.

On the stroke of half-time was when tensions boiled over. Playing on the wing, Francois Hougaard turned the ball over, the South African celebrating his achievement a little too much for Leicester captain, Ellis Genge who reached an arm out for the former Worcester Warrior.

Contact was made with the side of the wing’s head, a hair pull happening at the end of the movement. Home fans were baying for a red card, the movement a touch too violent for their liking.

Foley made his decision quickly, showing a yellow card to the England international who duly took his marching orders. A missed penalty from Jimmy Gopperth drew the half to a close, each side firmly in contention for a positive result.

At the break, all the talk at the Coventry Building Society Arena was to do with Genge’s dismissal and whether or not the citing officer would be making a call to the East Midlands club early next week. Genge returned to play to a chorus of boos, with no scores made by either side at that point of the second half.

A succession of Gopperth kicks handed Wasps a lead as the final 10 minutes approached. An Ali Crossdale knock-on in his own 22 handed Leicester incredible territory, their first scrum almost seeing Kini Murimurivalu crossing the whitewash, the resulting set piece also blown in favour of the visitors.

Thanks so much to travelling support , fantastic as always.

An honour for me to make 100 appearances for such a great club.

A yellow card was sensed at the third scrum, Biyi Alo and Zac Nearchou unable to cope with the power of their opposition. Two resets later, the seemingly impossible occurred.

Despite their dominance, Wasps turned the ball over less than a meter out, Alfie Barbeary the man at the heart of the turnover, the ball cleared away for a passage of play to wind the clock down.

Handing Leicester back the ball, it was a tense closing period at the CBS Arena, the scenes at the closing whistle beyond jubilation. Biyi Alo collapsed to the turf, several others doing the same on his periphery, every home fan that was able, up on their feet to herald their giant slayers.

“After the game it's pretty hard to speak,” Lee Blackett said. “It’s really emotional. You don’t get carried away stop but why are we in the game to celebrate wins like this. We won't get carried away because it actually was just built on a load of emotional energy.

“And that for me is how we won the game and that's why it was pretty difficult to speak really after the game. It was gritty, we had to scrap, and we had to fight. I thought our young half-backs (Sam Wolstenholme and Charlie Atkinson) got us back into the game.

"I don't think you should be in the game if you can't enjoy moments like that.

"We're not getting carried away, but it was a big win."

“That’s what comes down to against Leicester, set piece and how you manage the game when you choose when to run, when not to run really of the back of the kicking game. I thought those young half-backs did really well.”

Having missed two penalties in the game, George Ford fronted up to media at full-time, the Sale Sharks-bound fly-half crediting Wasps on their victory but downplaying the long-term effect a loss could have on Tigers’ season.

“Wasps had a game plan to play against us and they executed it very well, but we’re disappointed obviously,” he said.

“I don’t think we played anywhere near what we could but that just shows that the Premiership is such a tough competition. If you’re not quite on it on the day and the other team is, you’re going to lose.

“We’d have been naïve to think something like this wasn’t going to happen but the key for us now is to learn from it. We always say after we’ve won that it’s all about next week and it’s the same now, even though we’ve lost.”

Muck like his fly-half, Borthwick was quick to express his thoughts on the defeat, pointing out that his side let chances go to waste across the 80 minutes.

“We had plenty of opportunities in the first half and didn’t take them,” he said. “Then it was tight at half-time, and they outplayed us in the third quarter. We gave away too many penalties, and they have a lot of power in their team that got them in front.

“It wasn’t that long ago that Leicester Tigers would be going into games hoping to win. Afterwards, maybe winning, but for a large part didn’t.

“Now Leicester Tigers, after the game, are really disappointed that we didn’t win, asking a different question: why didn’t we win today? That for me is where there has been a bit of change.

“They want to win, the boys go into games believing they can win, they believe they can be in the fight. They didn’t today. Now they are rightly disappointed, but we will recover from it, we will work to be a better team for next week.”