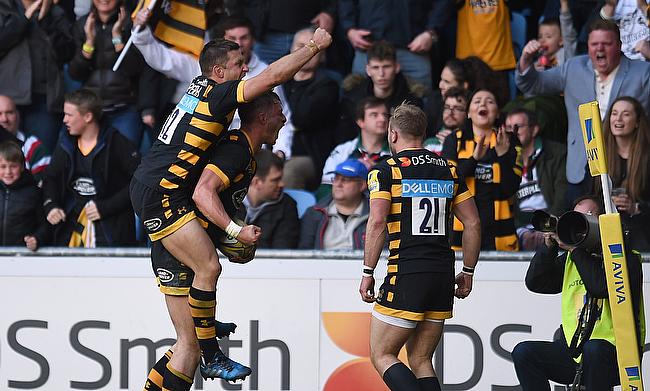 Replacement Josh Bassett scored a try in the 77th minute of the game as Wasps snatched a thrilling 21-20 victory against a spirited Leicester Tigers side in the semi-final of the Aviva Premiership at Ricoh Arena on Saturday.

Wasps will now head to Twickenham Stadium to take on Exeter Chiefs in this season's final on 27th May.

A seventh minute try from Australian international Kurtley Beale set up an early 10 point lead for Wasps with Aviva Premiership Player of the Season Jimmy Gopperth scoring a penalty and a conversion on either side.

Leicester Tigers bounced back strong with a double penalty from Freddie Burns followed by a touchdown from Peter Betham in the 26th minute as the scores were levelled 13-13 at the end of the 30th minute.

Gopperth provided Wasps with a slender lead of three points with his third penalty that came at the stroke of half time.

With all to play for in the second half, Telusa Veainu got Leicester back into the game when he danced past the post in the 51st minute and a conversion from Burns meant Matt O'Connor's men had a lead of 16-20 for most part of the final 40 minutes.

Wasps problems got compounded with an injury to Beale at the start of the second half as tension prevailed all over Ricoh Arena.

However, despite a spirited fight from Tom Youngs' side Bassett managed to squeeze over in a corner to score the decisive try in the 77th minute. Gopperth missed out on the conversion but Bassett's heroics proved enough as Dai Young's men completed a thrilling one point victory to make it to the final.

Lima Sopoaga to leave Wasps at end of season