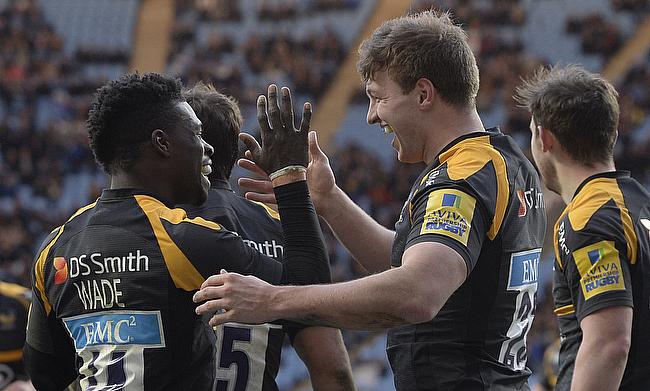 Wasps made it six wins on the bounce in the Aviva Premiership after a 42-10 victory over a Harlequins side who were very much second best at the Ricoh Arena.

Three tries in each half, alongside a fine kicking display from Jimmy Gopperth, saw the home side continue their momentum in 2016.

With little separating the sides ahead of kick-off, the tense atmosphere was apparent, as both teams made early unforced handling errors in the sun in Coventry.

The home side began to exert pressure onto the Harlequins defence as a series of lineouts, deep in the visitors' territory, kept the momentum firmly with Wasps.

That continued pressure led to Wasps taking the lead when Jake Cooper-Woolley picked the ball up deep into the Quins' 22 and sneaked himself over the line, for the first score of the game, with Gopperth adding the conversion.

Straight from kick-off, a break led to good field position for Dai Young's side and after a series of phases, neat handling allowed Christian Wade to dance around the defence to touch down, with Gopperth making no mistake, adding the extra points.

Harlequins needed a response and they got one moments later, as Luke Wallace seemingly forced himself over the whitewash on the end of a driving maul, with the video judge confirming the try, though the extra points were missed.

The Londoners were, however, the architects of their own downfall, as no sooner had they got themselves back into the game, Wasps responded with a third try.

Wade's speed would once again cause the Quins defence nightmares as he broke into the opposition half and the momentum allowed Wasps to gain ground and see Nathan Hughes touch down.

Gopperth was successful once again with the conversion, as Wasps went into the break in full control for a 21-5 lead.

Harlequins were seeking an early response in the second half but, once again, errors in good positions thwarted any momentum as they pushed to get back into the game.

Conor O'Shea's side finally got their noses back in the game when the ball was played across the Wasps 22, where Charlie Walker was waiting to pile over in the corner for the try with the conversion again missed.

Wasps were responding to everything that the away side were throwing at them and extended their lead when Thomas Young went over for a fine try, which was finally awarded after a lengthy look from the video referee.

Gopperth added the extra points to maintain his 100 per cent record with the boot as the home side edged 18 points in front at 28-10.

Wasps put the game to bed when Siale Piutau raced clear to add their fifth try, as a shell-shocked Quins were looking to avoid a demoralising thumping, and Gopperth piled on the points with another conversion.

Both teams made changes to personnel but the Wasps pressure continued in the dying moments and the sixth try duly came as a Frank Halai break saw the ball offloaded to Brendan Macken who went over with substitute Alex Lozowski rounding off the scoring.