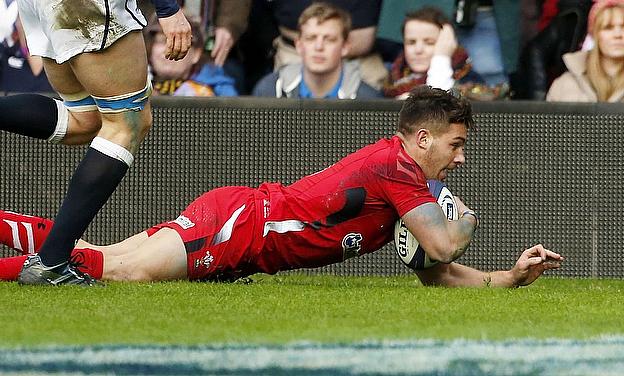 Wales claimed an eighth successive victory over Scotland as they revived their RBS 6 Nations title hopes following a thrilling 26-23 win at Murrayfield.

Nine days after being silenced on home soil by England, the dragon rediscovered its roar to an extent as tries by scrum-half Rhys Webb and centre Jonathan Davies consigned Scotland to a second Six Nations defeat in a row.

Full-back Leigh Halfpenny, who delivered an immaculate performance in attack and defence, kicked 16 points, while Scotland replied through a breakaway Stuart Hogg score and substitute lock Jim Hamilton's late touchdown, plus three Greig Laidlaw penalties and a conversion, and a Finn Russell conversion.

The Scots again showed obvious signs of their improvement under coach Vern Cotter, yet Wales looked a more dangerous team with ball in hand and possessed outstanding runners in Webb, Davies and Halfpenny.

Wales, though, still have to do it the hard way if they have any realistic aspirations of Six Nations silverware.

Sam Warburton's men know they cannot afford another defeat, and their next two games are against France in Paris and at home to reigning Six Nations champions Ireland.

For Scotland, it is far from a case of going back to the drawing board, as they again displayed some high-class rugby to confirm a feelgood factor that has surrounded them since Cotter took charge last year.

Both sides showed two changes from contrasting opening round Six Nations defeats as they faced a make-or-break game.

Sean Lamont replaced injured Scotland wing Tommy Seymour and prop Geoff Cross took over from Euan Murray, who does not play on Sundays for religious reasons.

And the visitors made a bright start, moving deep into Scottish territory through some precise phase-play. Halfpenny opened their account with a short-range penalty after six minutes.

Wales, though, pressed the self-destruct button just three minutes later when Scotland lock Richie Gray stole turnover possession 10 metres inside his own half, and Hogg outsprinted a shell-shocked Welsh blindside defence to claim an opportunist try that Laidlaw converted.

A Laidlaw penalty then put Scotland 10-3 ahead, but that strike was quickly cancelled out by Halfpenny's second successful kick as Wales cut their arrears at the end of a breathless opening quarter.

Wales continued to look dangerous with ball in hand, and it looked as though Halfpenny would complete his penalty hat-trick from inside Scotland's 22, but skipper Warburton opted for a kick to the corner and an attacking lineout instead, only for his team to then be penalised.

There was no obvious pattern to the match, but Wales gained a numerical advantage nine minutes before half-time when Russell received a yellow card after a mid-air challenge on his opposite number Dan Biggar.

And Scotland were punished almost immediately as Wales launched a flowing attack highlighted by Davies' surging run, before Webb collected Williams' inside pass and posted his second try in successive Six Nations games this season.

Halfpenny landed the touchline conversion attempt, taking Wales into a 16-10 lead, but the numbers were then evened out when Davies saw yellow for a poor tackle on Scotland number eight Johnnie Beattie.

And that was a cue for Scotland to put Wales on the back foot as half-time approached, with the visitors requiring some frantic last-ditch defending to preserve their advantage and troop off six points clear at the break.

Scotland immediately cut the gap after Russell returned through another Laidlaw penalty when Wales centre Jamie Roberts was punished for not releasing, but a more ominous-looking sign for Wales was a scrum that creaked with worrying regularity.

Halfpenny's fourth successful penalty then made it 19-13 to Wales, before a Laidlaw strike cut the gap, but Wales should have moved clear when they broke Scotland's defence midway through the second period.

Williams dived gleefully to score in the corner, yet referee Glenn Jackson consulted the television match official and then rightly ruled out the try following obstruction by two Wales forwards during the immediate build-up.

But Wales were not to be denied, and they effectively made the game safe 16 minutes from time when Davies crashed through a couple of weak tackles, touching down between the posts for a try that Halfpenny converted.

Hamilton touched down with the game's final attacking phase, with Russell converting, but Wales prevailed and collected two vital points.