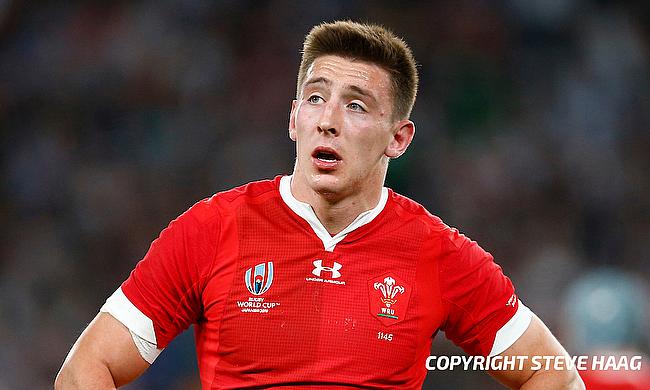 Josh Adams had an outstanding game for Wales
©Steve Haag

Wales came up with a dominating display as they blanked Italy 42-0 in the opening game of the Six Nations at Principality Stadium on Saturday.

This was also Wales' first game as Wayne Pivac took over as the head coach after Warren Gatland's resignation while Italy's losing streak in the Six Nations continues with their last victory in the competition coming way back in 2015.

Dan Biggar started the proceedings with a fourth minute penalty goal and seven minutes later he doubled the score with another three-pointer during which debutant Johnny McNicholl left the field for a head injury assessment.

Biggar slotted his third penalty goal inside 15 minutes before they scored the first try of the tournament by the 18th minute when Adams sped over the line making it 14-0. McNicholl returned to action by the 22nd minute before Adams scored his second try around the half-hour mark following assist from Biggar.

The Wales fly-half kicked his maiden conversion as Pivac's men completed the opening half with a 21-0 lead. Tompkins returned to the second half around the 53rd minute and straightaway made an impact when he dived over the line few minutes later and with Biggar improving it the home side stretched their lead to 28-0.

Wales thought they claimed the bonus point when North sped past the line but was disallowed with Tompkins charged with a knock-on but it was a matter of time before the centre dotted down in the 77th minute and Adams followed the suit at the stroke of full time. Leigh Halfpenny kicked the final two conversions as Wales started their title defence with a 42-0 victory.

The second round of the tournament will see Wales taking on Ireland at Aviva Stadium in Dublin on 8th February while Italy will face France on 9th February in Paris.

?? “It’s a foundation for a new regime, there’s still four games left in the competition and we’ll go one at a time"

Alun Wyn Jones believes @WelshRugbyUnion can still improve despite an emphatic start to the #GuinnessSixNationshttps://t.co/kiMkp1mzoh