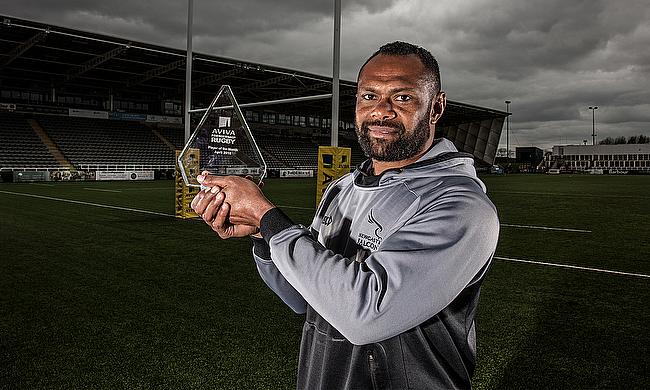 Vereniki Goneva has been named Aviva Premiership Rugby Player of the Month for April 2018.
©Aviva

Out with the old, in with the new - The changing face of Premiership Rugby
Aviva Premiership Round Up: Round 21
Saracens seal home semi-final spot following 14-51 win over London Irish
Worcester thump Harlequins 44-13 as London Irish face relegation

Goneva has been in stellar form for the Falcons as they claimed their first Aviva Premiership Rugby semi-final place in their history and he climbed to the top of the League’s scoring charts alongside Josh Adams.

And Rugby World Cup winner Will Greenwood said: “What an extraordinary player he is. Goneva is built like a man mountain and yet with nimble feet and soft hands.

“Everyone knows about him in the wide channels; a genuine flyer to add to his frame and awesome finisher given half a yard. But there are times when I see him like a back row forward in and around the fringes, and lethal from five yards out when it is supposed to be forwards territory.”

Goneva was judged by a panel of experts as the player who made the biggest impact in the League over the month April. He was involved in a three-way battle for the latest title, eventually beating Wasps’ full-back Willie Le Roux and Gloucester Rugby full-back Jason Woodward to the title.

And Greenwood added: “It’s clear he offers the Falcons a bit of everything. He’s lethal in attack but is also a brilliant defender, drifting or blitzing – he reads situations so well, and always wins the contact. He is also getting better – he has removed the looseness of his play, and it is pretty clear any team with Goneva in would finish top six.”

Goneva wins a trophy and a £250 donation to the charity of his choice.