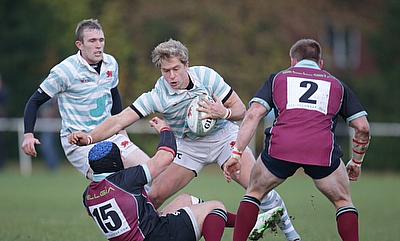 Cambridge's Charlie Amesbury was part of the side to win the Light Blues' first Varsity since 2009.
©University of Cambridge Rugby

Oxford and Cambridge ready for Varsity showdown
Oxford take the Men's, Cambrigde romp to victory in the Women's Varsity
Oxford put Cambridge to the sword

Cambridge clinched their first Varsity win since 2009 as they beat Oxford in a highly entertaining match at Twickenham.

A late try from Rory Triniman ultimately sealed the win for the Light Blues in the 135th Varsity which added to three second-half Fraser Gillies penalties.

Mike Phillips darted over to give Cambridge a half-time lead, while Oxford's Henry Hughes and Ed David scored either side of Triniman's try.

It was a day of righting wrongs for Cambridge who also scored their first try in this annual fixture for three years and they were gifted the opening score in this latest encounter.

Oxford scrum-half Henry de Berker's pass was intercepted by Phillips who sprinted home to touch down under the posts.

The game was nip and tuck in the second-half with Gillies and his opposite number Basil Strang trading blows from the tee, before Hughes rounded off an excellent Oxford move to tie the game up at 13-13.

Gillies then edged the Light Blues back in front with another penalty, before Triniman powered his way past the Oxford defence to stretch over and dot down superbly for what proved to be the winning try.

The Dark Blues responded instantly to set-up a grandstand finale as David sniped over in the corner, but it was merely a consolation as Cambridge ended Oxford's recent dominance in this fixture.

In the Women's Varsity, it was a tense affair as Oxford went in search of revenge following a 52-0 defeat last year.

Cambridge were rampant that day, but were unable to find that spark this time around and it was Wilcock's penalty early in the first-half which sealed the victory.