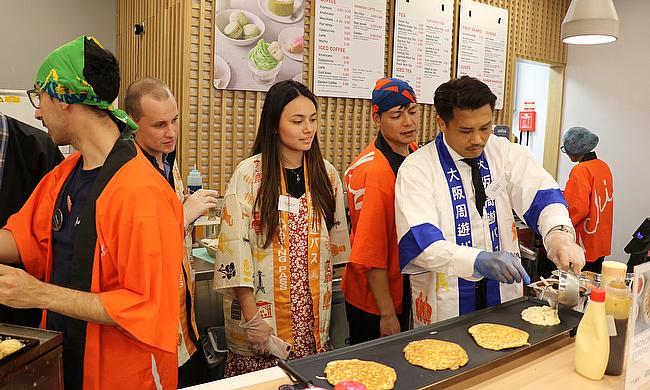 Shane Williams: This is the strongest Welsh squad I have seen in my lifetime
Japan will be targetting Scotland in World Cup - Eddie Jones
Japan gearing up to host first Rugby World Cup in Asia
Duane Vermeulen joins Kubota Spears

It was a moment which will never be forgotten, a match which defied the odds and a result which created Rugby World Cup history.

Rewind to the 19th of September 2015 and the location is Brighton.

It is Japan against two-time World Cup winners South Africa and with five minutes left to play, the Springboks had the advantage.

However, Karne Hesketh was able to write himself into Rugby World Cup folklore as he darted over to snatch a dramatic victory for Japan and cause one of the greatest rugby upsets of all time.

Now, Japan is ready to take centre stage once more as they prepare to host the World Cup for the first ever time and former international Shotaro Onishi believes the ‘Miracle of Brighton' has helped increase the excitement surrounding the upcoming tournament.

“At the time of the World Cup in England in 2015, you already knew that the next World Cup was going to take place in Japan,” explains Onishi, who is a Rugby World Cup 2019 ambassador for host cities Osaka and Kobe.

“But, because of the result and fantastic upset against South Africa, that really helped excite every person in the world even further to come to Japan this year.

“All these things which have accumulated over the years, we as Japan Rugby have put in a lot of effort into building the sport and that is coming to fruition.”

Indeed, Japanese Rugby has certainly developed over the last four years with the Brave Blossoms competing more regularly with Tier One nations whilst domestically, the Top League is growing stronger especially due to the influx of foreign players such as Matt Giteau and Duane Vermeulen.

Added to this, Japan are hoping there will be a sporting legacy left behind after this World Cup and with the Olympic Games also taking place in Tokyo next summer, Onishi insists these are the moments his country will embrace.

“For Japan, it is a great opportunity to have this momentum going on, beginning with us. It is great to be able to kick off this momentum of major sporting events.”

When it was announced Japan were going to host the World Cup this year, it was a landmark moment. For the first time, the competition will be held outside a ‘Tier One’ country and for visiting fans, it presents a unique opportunity.

With hosts cities Osaka and Kobe ready to play their part in creating a vibrant and welcoming atmosphere, Onishi hopes Japan, as a whole, can put a show on.

“We have always been waiting for this opportunity so we can introduce and show what Japan has to offer to the world,” says Onishi.

Ex-Japan centre @shotaroonishi looks somewhat bemused by former Wales wing @ShaneWilliams11's attempt to make takoyaki - a must have for all those visiting Kobe and Osaka during #RWC2019.

“I understand that unless you have got a very good reason to go and visit a country such as Japan, you wouldn’t go. This is a great opportunity for rugby fans to come and visit Japan and be immersed in its beauty, but also see what is awaiting them because when you think about it, the rugby match is only for 80 minutes.

“Every minute away from that, you will be immersed in the culture and also conversing with the local people. That was my experience as well when I was playing at the World Cup in other countries so this is going to be a very special experience for them.”

Onishi represented the Brave Blossoms in the 2007 World Cup in France and he admits it is ‘very special’ to see Japan hosting this iconic tournament.

In terms of on the pitch, Japan have been drawn into Pool A alongside Scotland, Ireland, Samoa and Russia.

The Brave Blossoms secured three victories in the group stages of the Rugby World Cup back in 2015, but did fail to advance to the knockout stages. However, Onishi feels home advantage could work in Japan’s favour this time around as they aim to upset the applecart once again.

“In terms of the level of condition of the national team, we’re at the strongest,” says Onishi, who represented Japan on 33 occasions. “On top of that, we proved to the world and to ourselves that we could do it in the previous World Cup. That gives us an extra boost.

“Of course, we are preparing for games against Scotland and Ireland. They will be tough games, but one of the advantages we do have is that we are at home and I really hope the Japanese national team is going to show a better performance than ever.”

As is tradition, the host nation will begin the tournament and Japan face Russia in Tokyo on September 20th.

Whilst any opening match in a major competition is seen as crucial, Onishi knows the performance which Japan produce – combined with the result - could dictate how successful the Rugby World Cup is for the country as they aim to continue the growth of the sport.

“First and foremost, the most important match for the Japanese national team, as well as the World Cup in Japan, is the match against Russia,” Onishi adds. “Of course, we have to win against Russia but it is also about how we are going to perform.

“I think the first match will also send out a message to say whether this World Cup will be a success or not because in countries like England or France, rugby is very popular and is an established sport, but in Japan it is not. How we are going to play will help people convert into rugby fans and the right result will help also. I think the first match can decide how the tournament is going to go.”