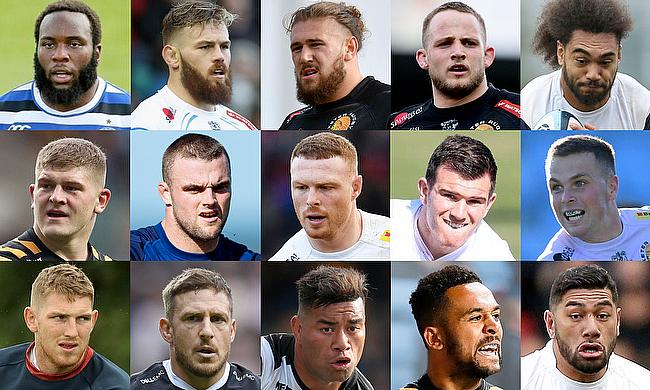 Ahead of this weekend's final at Twickenham, the Talking Rugby Union team have cast their votes and below is our 2019/20 Premiership XV of the season.

2) Hooker - Luke Cowan-Dickie (Exeter Chiefs): The Chiefs' explosive hooker makes the XV with, not only his impressive strike rate, but also the dynamism he brings to both open play, tap-and-go's and set-pieces.

3) Tighthead - Harry Williams (Exter Chiefs) - A linchpin at scrum and set-piece in general, but he's added a defensive string to his bow, regularly clocking up double figures per game in the hits department.

4) Second-row - Jonny Hill (Exeter Chiefs) - Huge carrying presence and well-suited to running hard at the opponents' line along. Exeter's pick-and-go game also sees him with an impressive 10 tries this season.

?? "I firmly believe that when we’re on our game, no one can touch us"

We speak to Jonny Hill, fast becoming a major piece of the Exeter Chiefs squadhttps://t.co/gZtDxTzTPI

5) Second-row - Chris Vui (Bristol Bears): The Samoan international has been using his considerable bulk all season to smash through opposition lines before offloading after contact, plus he has been dominant the lineout.

6) Blindside Flanker - Jack Willis (Wasps): It's been an unbelievable season for the 23-year-old after a lengthy injury, but his return has seen him top the turnover charts (44) and also crowned Premiership player of the season.

7) Openside Flanker - Ben Earl (Bristol Bears): On loan from Saracens, the backrower has shown what he is capable of when on top form... speed, agility and power isn't a bad combo for the Premiership's joint top-try scorer with 11.

8) Number 8 - Sam Simmonds (Exeter Chiefs): Sam Simmonds has been electrifying all season, continuing to change the narrative on how large a number 8 should be...but with a Champions Cup medal, and a Premiership final on the way, the European Player of the Year's form is unquestionable.

9) Scrum-half - Ben Spencer (Bath Rugby): After leaving Saracens behind, Ben Spencer has shown his ability to create as well as do the basics very well. He was instrumental in Bath's top-four finish so it is hard to think why he isn't in England's current plans.

10) Fly-half - Joe Simmonds (Exeter Chiefs): The 23-year-old has steered his side to a Premiership final and a memorable Champions Cup win. Add 143 points to his name and it's no wonder why he made our XV.

1?? You've just been named European Player of the Year.

2?? You've just won the Champions Cup with your boyhood club.

3?? You hand your little brother (and captain) the Star of the Match award for the final.

Sam Simmonds got to live that moment last night ?? pic.twitter.com/WdPT4g4HsV

11) Left winger - Ruaridh McConnochie (Bath Rugby): The sevens convert has had a great season following his inclusion in England's 2019 RWC squad, he's continued to mature in the Premiership and racked up nine tries in the process.

12) Inside centre - Jimmy Gopperth (Wasps): Gopperth has been a points machine for Wasps this season with 165. Reliable and consistent in the centre, the playmaker has been key to their rise to the Premiership final.

13) Outside centre - Siale Piutau (Bristol Bears): The first Piutau in our XV. The veteran centre has been bulldozing his way through defensive lines, leaving copious amounts of space for the men outside him all season.

14) Right winger - Zach Kibirige (Wasps): With pace to burn, the Wasps winger has been on fire all season, reflected in the 30 clean breaks he's made. It shouldn't be long before he's turning heads at international level.

15) Fullback - Charles Piutau (Bristol Bears): Averaging an incredible 103 metres per game, the All Black international and our second Piutau has been unstoppable in attack throughout the season, sitting top of the 'metres gained' charts with 1477m.