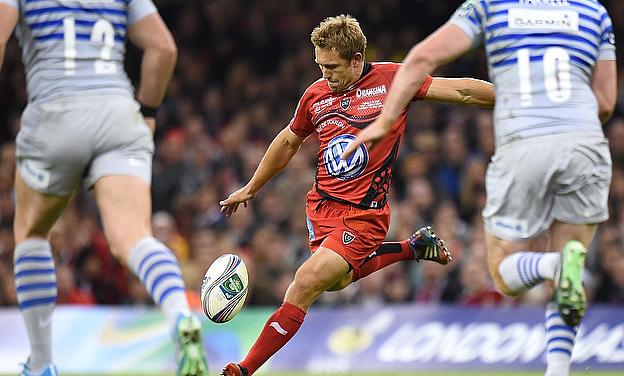 England World Cup winner Jonny Wilkinson signed off in style from the United Kingdom in his penultimate game before retirement as Toulon comfortably retained their European title.

The Toulon captain and fly-half kicked a drop-goal, two penalties and two conversions of the tries scored by centre Matt Giteau and flanker Juan Smith to sink Saracens 23-6 at the Millennium Stadium.

Wilkinson, who celebrates his 35th birthday on Sunday, will retire following next weekend's French Top 14 final against Castres in Paris.

And he will bow out of the game as a double Heineken Cup winner as Toulon emulated Leicester and Leinster in being crowned European champions for a second successive season.

Under-par Saracens could only manage two Owen Farrell penalties in reply as Toulon eased towards winning the 19th and final Heineken Cup final before it is succeeded by the European Rugby Champions Cup next term.

Farrell and company now have to pick themselves up for next weekend's Aviva Premiership final against Northampton at Twickenham, and it will require a vastly-improved display after they appeared to suffer an acute dose of stage fright.

Saracens ultimately had no answer to Wilkinson's calm assurance, and he will enter retirement feted as one of the all-time greats.

Saracens, bidding to become the fifth different English club to be crowned European champions, struck an initial blow through a third-minute Farrell penalty, but Toulon asked immediate questions via some slick handling.

Given how high the stakes were, there was an understandable caution from both teams, but Toulon appeared a dangerous attacking outfit despite little initial contribution by Wilkinson.

Toulon, though, were their own worst enemies as Juan Martin Fernandez Lobbe was shown a yellow card following a high challenge on Saracens lock Alistair Hargreaves, but it remained 3-0 entering the second quarter of a tense battle.

Toulon eventually stirred 10 minutes before half-time when a Wilkinson pass freed Giteau, whose kick ahead was superbly gathered by wing Drew Mitchell, and his inside ball sent supporting Giteau scampering over.

Wilkinson inevitably kicked the touchline conversion, hoisting Toulon 7-3 ahead as the clock ticked down on a first-half that lacked sustained quality.

And then the former England fly-half landed a trademark drop-goal that put Toulon 10-3 in front and gave Saracens plenty to think about halfway through their first European final.

The game was largely a frustrating stop-start affair and offered little fluidity from both the players and referee Alain Rolland, while the atmosphere - or lack of it - matched a disappointing occasion.

Toulon looked to build on their advantage and they had plenty of strength on the bench as locks Ali Williams and Jocelino Suto appeared with 30 minutes of the contest still remaining.

And it was the cue for Toulon to finish Saracens off via a move that owed everything to centre Mathieu Bastareaud's surging midfield power.

Saracens could not contain him and his approach play resulted in Smith and Fernandez Lobbe linking expertly, before Smith finished off a sparkling move.

Wilkinson converted and then kicked a penalty to leave Saracens with no way back as France ended 19 seasons of Heineken Cup rugby as the tournament's dominant nation above England and Ireland.

Saracens will feel deeply frustrated that they could make little impact on the contest, but with Wilkinson pulling Toulon's strings, the French club held a vice-like grip on second-half proceedings.

The result proved a hammer-blow for Saracens yet they could have no complaints on a day when they were given a clear lesson in how to win big games when pressure was at its most intense.

And Wilkinson received a standing ovation when he departed three minutes from time, his job done and Toulon ready to enjoy riotous celebrations.