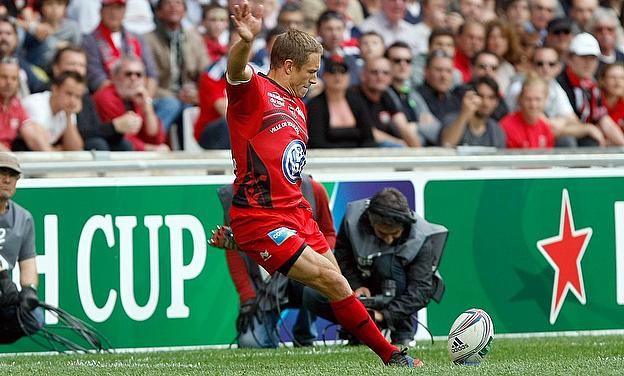 Defending champions Toulon stand just 80 minutes away from retaining their Heineken Cup crown after they edged past Munster 24-16 in Marseille.

Jonny Wilkinson kicked 21 points as the Top 14 side set up a May 24 final against Saracens at the Millennium Stadium - a repeat of last year's semi-final which Toulon won 24-12 in London.

Munster threw the kitchen sink at the star-studded hosts, coming from 18-9 down at half-time to score the game's only try through winger Simon Zebo.

However, Rob Penney's men were left to rue some costly penalties in the closing stages of both halves as their record 11th Heineken Cup semi-final appearance ended in defeat.

Ian Keatley, who kicked 11 points, and number eight James Coughlan starred during a defiant second half display but the Irish province were foiled by French opposition at the semi-final stage for the second year running.

Wilkinson nudged Toulon into a sixth minute lead at a heaving Stade Velodrome, drilling over a penalty from wide on the right after CJ Stander failed to roll away.

Keatley responded within two minutes with a confident kick from outside of the 22, rewarding a steal from fit-again centre Casey Laulala.

Munster laid down their first physical marker when they held up Danie Rossouw in a choke tackle and two stabbed kicks forward from Keatley kept the visitors advancing.

However, David Kilcoyne was penalised in two scrums and a high tackle by Conor Murray on opposite number Sebastien Tillous-Borde saw Wilkinson restore Toulon's advantage.

Bernard Laporte's charges gained a territorial edge as the penalties mounted against Munster, but Wilkinson sent a kickable attempt wide in the 24th minute.

There was no second let-off for Munster when Zebo was caught offside and Wilkinson fired over with aplomb from the right wing for 9-3.

Munster then capitalised on a turnover as Keith Earls scampered into the 22 and Argentinian flanker Juan Fernandez Lobbe made contact with Murray's face as he came in at the side of a ruck, with referee Wayne Barnes reaching for his yellow card.

The Toulon crowd voiced their disapproval as Keatley lined up and converted the resulting penalty. Tellingly though, Munster were unable to use their numerical advantage leading up to the break.

They coughed up the ball from the restart and Wilkinson picked off a lovely 31st minute drop goal. Those three points were cancelled out when Keatley punished a scrum infringement from Carl Hayman.

But Munster offered up two more soft penalties while in possession, Wilkinson popping over a sitter from in front of the posts and full-back Delon Armitage adding a monster effort with the last kick of the half.

Bryan Habana burst into life on the resumption, profiting from a blocked Earls kick to charge forward and only Zebo's last-ditch tackle prevented a certain try for Steffon Armitage.

James Downey did likewise against Rossouw and somehow Munster clawed their way back downfield, drawing strength from Keatley's precise touchfinders and their underused lineout maul.

Toulon were stung in the 53rd minute when having stalled a Munster maul five metres out, Murray slipped a pass away for Zebo to crash over in the left corner past Drew Mitchell.

Assistant referee Luke Pearce spotted the grounding much to the dismay of the home fans and Keatley followed up with a peach of a conversion to make it 18-16.

The Munster out-half narrowly missed a long range penalty approaching the hour mark and Toulon hit back when replacement David Smith broke free and was tackled without the ball by Earls, resulting in the semi-final's second yellow card.

Wilkinson mopped up with the three points, but the 14 men showed impressive resilience as they turned to their maul again after opting not to go for goal from inside the Toulon 22.

Munster's brave decision did not pay off though and Toulon, despite struggling for possession and territory in the final quarter, set up Wilkinson for a clinching 80th minute penalty after Donncha O'Callaghan was pinged at a ruck.

The result keeps Toulon on course to match the achievements of Leicester Tigers (2001/2002) and Leinster (2011/2012) as the only teams to have successfully defended the Heineken Cup.