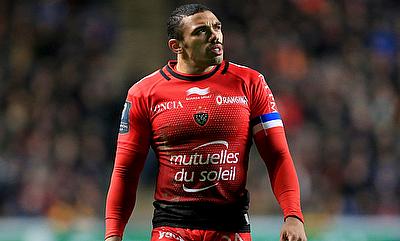 Denying Toulon a home quarter-final will be no consolation for Bath after handing a 19-14 victory to the three-time European champions.

The hosts were leading 14-11 just short of the hour mark when Scotland flanker David Denton caught Quade Cooper's tricky cross-field kick but promptly gave the ball away to Springbok wing Bryan Habana - who scored one of the easiest tries of his illustrious career.

Bath had fought their way back into the game with a try just after half-time by Anthony Watson and had taken the lead with a George Ford penalty.

It took a late James O'Connor penalty to seal victory for the French side who had to fight hard to see off the home challenge but they needed two more tries to finish ahead of Wasps in Pool Five.

Bath made six changes to their pack and gave Horacio Agulla a run on the left wing after defeat at Leinster last week ended their lingering hopes of a quarter-final spot.

Ford had the first chance to put points on the board but his penalty attempt from 40 metres pulled wide after Steffon Armitage was offside at a maul in the third minute.

English rugby's most talked-about exile was his usual nuisance at the breakdown though and immediately forced a penalty from Anthony Watson, who hung on to the ball for too long when tackled. O'Connor stepped up to kick the goal from 40 metres.

That became 6-0 to the visitors on 10 minutes when the Australian added another penalty from a tight angle after Dominic Day climbed all over his opponent at a line-out.

His second row partner Charlie Ewels raised a cheer by bursting through the Toulon defence on a cleverly delayed pass from Ford. Hooker Ross Batty was in close support but Bath lost control of the ball at the next ruck in a moment that epitomised their season so far.

A line-out catch and drive finally earned Bath some reward when Toulon brought down the maul and Ford kicked the goal on 16 minutes.

The reply was almost immediate as Agulla failed to deal with Ma'a Nonu's cross-kick and Josua Tuisova was twice involved before skipper Jocelino Suta gave a simple scoring pass to Armitage. O'Connor's conversion was wide.

The only other score before half-time was a 27th minute Ford penalty although they needlessly gave O'Connor two chances to improve his side's 11-6 advantage.

Bath came out after the break a different team. A decision to run a kickable penalty did not seem to please the coaching team - until it yielded an unconverted try for Watson. Henry Thomas and Ewels made a combined burst in midfield and Eastmond's inside pass opened things up for Agulla before he muscled his way over.

Ford could not convert but knocked over a penalty from 40 metres shortly after to put Bath in front for the first time at 14-11.

Toulon, needing a bonus point win to be certain of an easier route in this year's competition, responded with urgency and turned it around with Habana profiting from Denton's mistake.

Bath were just fighting for pride and a win to get their stuttering season back on track. David Wilson led a late charge up-field with an old-fashioned foot rush and then helped win a penalty from a driving maul.

Ford was just wide with a difficult kick on 74 minutes, but O'Connor made no mistakes with his own attempt shortly after to complete the scoring and complete his haul of nine points.