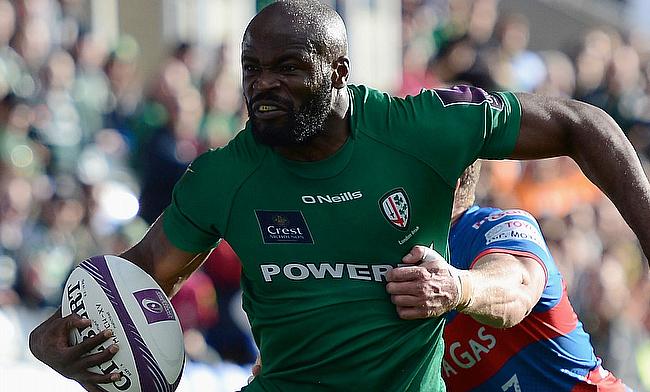 The English wing made a record-equalling appearance last weekend and the one club man is ready to help Irish return to the top flight.

At the beginning of this month, Mike Brown and Danny Care reached milestones for Harlequins. Brown made his 300th appearance for his club side in their recent clash with Saracens while Care played his 250th game for Quins in the same fixture against the Premiership champions.

The England pair are ‘one club’ men and they have been plying their trade at the top level for many years, but in the second tier of the game, there is another player who falls into the same bracket as Brown and Care.

Forty miles west of Harlequins’ Twickenham Stoop, Topsy Ojo is continuing to shine for London Irish at the Madejski Stadium. On Saturday, the 33-year-old became the Exiles’ joint-record appearance holder alongside the recently retired David Paice as he pulled on the green jersey for the 290th time in Irish’s Championship fixture with Yorkshire Carnegie.

Following an injury hit season last term, you’d be forgiven for thinking Ojo’s desire to carry on playing would be starting to fizzle out, but Irish’s record try-scorer has as no intentions of hanging up his boots anytime soon.

“The weekend was really special,” Ojo exclusively told TRU. “I think to celebrate that moment at home and in front of our fans and my family in particular, was really nice and I thoroughly enjoyed it!

Ojo also topped off the afternoon by scoring a try as Irish thrashed Carnegie 72-5 to make it six wins from six to begin the season.

“If you could almost plan how these things can go, you want to score, have a good win and celebrate it,” Ojo adds. “I was able to tick all of those things off!

“I have probably been injured more than I would have liked over the last three years so hopefully, I am making up for some lost time.

“I feel fit, healthy and strong so I really enjoy being out there on the pitch with my teammates and as long as that continues, I will keep going. I love being able to play as much as I can.”

Ojo admits he is still in good shape and he will most likely become Irish's record apperance holder against Doncaster on Saturday.

But whilst he continues to perform at a high level for his club, the winger has also recently been focused on a role away from the field as he became part of the coaching set-up at National Two South side London Irish Wild Geese at the beginning of the campaign.

After 15 seasons of playing for London Irish, Ojo is now lending his experience to the Exiles’ amateur team, primarily as a backs and attack coach, but he is also helping out across the board.

Asked whether coaching is a path he would like to go down in the future, Ojo added: “It is definitely an option.

“I have just finished my Level 3 badge with the RFU so I have got that as well. It is something I have had an eye on over the last couple of years, just prepping before I do have to finish.

“Coaching is something I have always enjoyed and working with the Wild Geese this year is great because it is a good group of boys.

“We are all in-house now so that means playing with the pros and looking after the amateurs so I am really enjoying it and we will see if that is something I want to pursue in the long term.”

While the Wild Geese are struggling in the fourth tier of English rugby, the Exiles are flourishing in the Championship. Declan Kidney’s side were immediately relegated from the Premiership after promotion in 2016/17, but Irish have responded in the perfect manner.

Their comprehensive win over Yorkshire Carnegie last Saturday saw them secure six wins in a row which leaves the Exiles just two points off league leaders Ealing Traifinders, but with a game in hand.

“To bounce back is our primary goal,” added Ojo. "There is a lot of work to do to make that happen. We started how we wanted to with six wins from six which is great and we just need to keep pushing.

“There is another couple of games before the league takes a break for a while and it is important we finish this next block of matches through October as we are now; undefeated and with as many points as we can rack up.

“Then, it means we can make life easier for ourselves if we can keep winning games and keep things ticking over.

“We are in a good place at the moment. We have kicked on in the last two to three weeks with our performances. We are now heading towards the tricky autumn and winter period where we need to stay on top of things so we need to make sure we don’t slip up.”

Promotion is the number one target at Irish this season, but the bigger picture is to try and establish the club in the Premiership as the Exiles crave a period of consistency instead of yo-yoing between the top two tiers.

For Ojo, as he has always done for Irish since he made his debut in 2005, he just wants to give everything to the cause as the winger and his beloved club aim to return to the top table of English rugby.

“This has been home for 15 years for me,” he added. “With me being injured last year and not being able to play a part in helping us fight off relegation, that was quite tough.

“This year, I am back on the pitch and I am fit and healthy. I am doing everything I can to help us achieve our goals and then long term, it is about re-establishing the club in the Premiership and I am doing all I can to help them.”