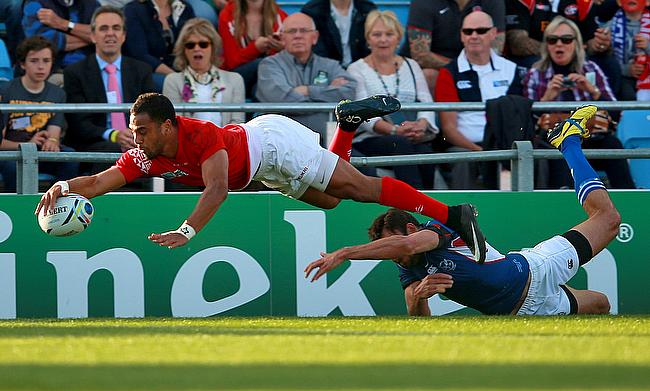 Tonga came up with a strong second-half performance as they signed off from the ongoing Rugby World Cup with a 31-19 win over the United States of America at Hanazono Rugby Stadium on Saturday.

The win was Tonga's first in the tournament as they finished fourth with six points while USA had a disappointing tournament after losing all their four games. Tonga had the better of the opening exchanges as Siegfried Fisi'ihoi dived in the corner in the 17th minute and Tane Takulua kicked the conversion to make it 7-0.

USA went on to level the scores by the start of the second quarter when Mike Te'o raced down the line breaching the defence of Tonga and dived over in the 21st minute that was improved by Aj MacGinty. USA soon went on to lead with Te'o scoring his second in the 26th minute for an unconverted try after good work from Cam Dolan as the teams finished the first half with a 7-12 scoreline.

"...just look at the amazing supporters and the people in the streets. The whole event has been amazing here..."@USARugby head coach Gary Gold speaks respectfully on his experience at #RWC2019 in Japan and what it would mean for USA to host a Rugby World Cup #USAvTGA pic.twitter.com/6b09Fv5FOc

Tonga narrowed down the gap by the 51st minute with Takula's maiden penalty goal and they seized the momentum scoring back to back tries in a span of five minutes. It was first Veainu, who sent a kick to ‘Atieli Pakalani, who in turn offloaded to Mali Hingano for his side's second try in the 58th minute and four minutes later it was Siale Piutau's turn to dot down as Tonga increased their lead to 24-12.

"What do you do, I've aged 10 years in the last two months so that's nothing, I'm used to stuff like that..."@officialTongaRU head coach Toutai Kefu gives hilarious answer when asked about his sides decision to scrum in the last play against USA #USAvTGA #RWC2019 pic.twitter.com/ODbKUqb6AO

The final four minutes saw Tony Lamborn providing a glimmer of hope for USA with a try but Tonga had the last laugh as Veainu capitalised on a grubber kick from Latiume Fosita to touchdown in the added minutes to complete a 31-19 win.

Tonga's Siale Piutau dedicates his @Mastercard Player of the Match award to his late sister, who passed earlier this year.#StartSomethingPriceless #RWC2019 #POTM pic.twitter.com/QrWRfPRPZt