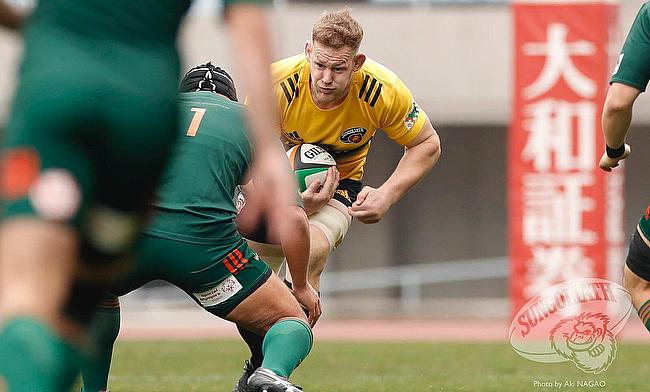 Having made just shy of 200 competitive appearances for Gloucester, Tom Savage’s move to Japan came somewhat out of the blue.

Despite not many English names gracing the leagues, Savage joined a Suntory Sungoliath team which includes stars aplenty. Matt Giteau, Samu Kerevi and Kotaro Matsushima have all represented the Tokyo based team, but they were not been able to continue their campaign this year as the Top League was cut short as a result of the global Covid-19 pandemic.

Joining the team in 2019 after another strong season at Kingsholm, Savage says that his move to Japan was unexpected, but one that he could not turn down.

“It was completely out of the blue and something I didn’t expect,” Savage said. “Because of how very few people from the Premiership or from Europe that go and play in Japan, it was something that I had never really considered doing before the offer came. It was just like being out of contract any other previous time.

“I put negotiations on hold to see where I was in the pecking order. Right before we were finalising things with Gloucester, I got this curveball. I had some interest from Japan and my agent asked if I would entertain the interest and it snowballed from there.”

The way in which Savage describes his move to Suntory makes it seem like a once in a lifetime opportunity and it is an attitude that seems to be catching on amongst British rugby players. Two weeks ago, Freddie Burns revealed that he would be on his way to the Shokki Shuttles, whilst rumours still swirl around Hadleigh Parkes’ possible next stop.

Savage’s former Head Coach, Johan Ackermann, has also confirmed his exit from Gloucester with the NTT Docomo Red Hurricanes being his next destination.

We are thankful for Johan's time at Gloucester Rugby and wish him the very best in his new role.

“Obviously, I can’t speak for those guys, but from my experience, I was very fortunate to have played a long time at Gloucester,” Savage said. “You get that opportunity to go and do something you love, which is rugby, and get a life experience along with it, trying to learn a new language, live in a different country, all of these things are an opportunity you might never get offered again.

“I think it is very appealing to boys and it has been great for me going into a new environment. I feel that my game has certainly been improving over there, the coaching is really good with how professional it is. It is certainly not a place that you will go to and go backwards playing.”

Going straight in at the deep end upon arriving in the Japanese capital, Savage was just 10 days removed from Premiership semi-final heartache when he landed in his new hometown. Following changes in the rugby calendar, due to the Olympics, Savage would play in the Japan Rugby Top League Cup in preparation for a league season starting in January 2020.

Falling in the semi-finals against the Kobe Kobelco Steelers, Savage was surrounded by Super Rugby and southern hemisphere stalwarts. As a result, it was a style of play that the lock had never experienced before.

“The speed of the game was the one thing that really got me and I think because they have got more influences from Super Rugby, they base their style of play on that,” Savage said. “At the moment, in Japan, the attacks are slightly more on top of the defences, unlike in the Premiership now where you see a lot of games that are low scoring.”

During his eight seasons at Gloucester, several of which were split with his time at Hartpury University, the 2015 Challenge Cup win remains the only senior trophy that Savage won with the club.

Playing alongside Tom Palmer at the Stoop that day, Savage was a constant for the Cherry and Whites for the best part of this decade. Now at Suntory, he says that he is enjoying the challenge of a new environment.

“I had been at the same club for a long time and I have obviously had coaching changes and things, so that would almost feel like being at a new club,” Savage said. “There have been changes like that throughout my career that you have to cope with as a player.

“Just the complete package of being out of your comfort zone, new groups of friends, how you socialise, how you travel around, the language barrier. Sometimes it was like a sink or swim moments, but I found myself really enjoying it and embracing the challenge. I feel that it has been quite refreshing as it is all new.”

Having signed a two-year contract at Suntory, Savage will be returning to Tokyo when it is safe to do so and for the rest of his life, he will always be tied to the country. Not only will his name live long in the record books of the club, but Savage’s first child was also born in Japan on Christmas Day.

With time to spare until return flights are confirmed and booked, all Savage can do is wait and exercise in his in-laws’ garage that he has commandeered for the foreseeable future.