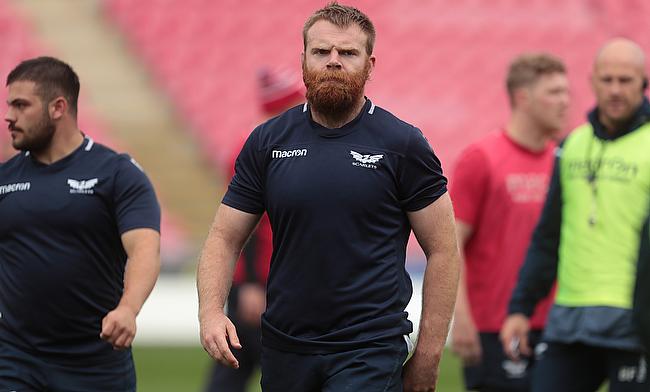 The sight of Tom Phillips being carried off with a serious knee injury against Edinburgh just about summed up his luck.

A spell on the sidelines is something which the former Wales U20s captain has unfortunately become accustomed to as a succession of injuries have plagued his promising career.

Back in September, the 26-year-old had only just returned to Scarlets having been released by the club at the end of the 2020-21 campaign, so to suffer another setback could have knocked Phillips’ confidence for six.

However, rather than letting it get him down, there is little worry when speaking to the back-rower and that is testament to the resilience he has been able to instil within himself throughout his all too frequent visits to the treatment table.

72' A sad sight as Tom Phillips leaves the field on a stretcher. A warm round of applause around the ground

“I think it is important to take silver linings from whatever situation you find yourself in. This could have happened to anyone this injury, but as I did it playing for Scarlets, I have been given the best treatment. If I’d experienced this injury playing club rugby, that is a couple of years potentially out of your career so the silver linings I took from it was that I am in the best possible place to get this injury right and get back to playing at a high level.

“The physio team I am working with, we have worked well at just setting little goals. Monthly goals, weekly goals so I keep progressing to a target which isn’t nine months down the line.

“I am five months in, but it doesn’t feel like five months in a good way. Because I have had these little targets, it has been so far, touch wood, a smooth recovery process.”

After fighting his way back into the professional environment last summer, to be struck down by another injury in Scarlets’ first game of the United Rugby Championship campaign magnified the misfortune Phillips has endured since securing a Grand Slam with Wales at the U20 Six Nations in 2016.

He doesn’t want to tempt fate, but Phillips hopes that if he remains on track with his latest rehabilitation, he may well pull on the Scarlets jersey again this season, with Dwayne Peel’s side preparing for the run-in in URC.

But Phillips isn’t sat staring at the calendar, counting down the days until he returns to the field.

When the blindside flanker was originally let go by Scarlets, he set his sights on stepping into the semi-pro game to play as well as continuing to develop himself as a coach.

But having earned a fresh contract with his home region, his knee injury forced his hand slightly and Phillips has had more involvement with coaching Kidwelly RFC’s 1st XV in Carmarthenshire.

“It [coaching] has mentally kept me thinking about rugby,” Phillips says. “It would be easy enough for me to sit back, do my rehab and not step away from rugby, but be less involved.

“Keeping your mind and your brain ticking over, explaining drills, explaining reasons why something works and why something doesn’t work just keeps you sharp so you know when you come back, you have got a better chance of getting back to that level you were at. It is a hobby as well as helping someone out.”

His appreciation for the grassroots game is something the forward touches on, praising the volunteers at clubs such as Kidwelly because without them, community rugby just wouldn’t function.

But it is the humbleness of Phillips which shines through when discussing the lower levels of the sport. Despite so many disappointing setbacks in his career, the 26-year-old is still privileged to represent his home region and through his coaching, he is determined to give something back to the local clubs.

And with the help of Scarlets and Veo, Phillips is doing just that.

The URC outfit linked up with one of the global leaders in AI-powered sports recording and analysis last year and Scarlets regularly use one of Veo's cameras in training sessions and, on occasions, in match scenarios.

Having enquired about the technology to Scarlets’ Head Performance Analyst Jarrad Griffiths, Phillips has recently taken the Veo camera to Kidwelly in order to drive the standards of everyone at the club, including himself.

“They [Kidwelly] didn’t have the budget for a video analyst so I wanted to see if there was anything out there that could add a layer of professionalism to what we wanted to do,” Phillips explains.

“The only thing I managed to get done was one of the local committee members holding a camera and a tripod and just getting a close up of all the game. I started asking the question; ‘How can we improve? What is out there that can help us?’

“Coincidentally, I was up at the top field watching Scarlets training because I have been out injured and I saw the Veo camera and Jarrad using it and I just questioned Jarrad about it. He explained to me that basically it is an analysis device which allows you to record the game or session automatically and clips up video for you to analyse. I thought it sounded a bit too good to be true!

“I tried it out at Kidwelly and honestly the results we have had from using it have allowed us to improve our game. Someone from the committee sat through an analysis session we were doing and they were so impressed, I think they are in the process of getting one themselves so they can use it at all levels of the club. That is the beauty of it.”

“I don’t think Tom really wants to share it with anybody!” laughs Griffiths. "He has been hogging it for the last few weeks!

“Because the players have noticed this quite colourful camera up where we are filming during training, they have asked us questions around why and what it is. When we have shown it to them and explained it to them, people like Tom have taken it down for a couple of trials with his local club and he has used it for two games or so now to try and boost the analysis structure down there.

“Veo helps them because it gives them the ability to have footage uploaded rapidly after the game. It will be up in the timeframe so the players will be able to go and watch stuff on there so for Tom, he says it has proved invaluable.

“At that lower level, it probably gives clubs a little inkling into what the professional side of it is like which is a massive thing. You log on, you can see your line-out, scrum, restarts and stuff and it obviously takes you to tries so for the club to have the ability to see what can be done is tremendous.”

Whilst Kidwelly may well have used the Veo technology this week as they prepare for a league meeting with Tenby United in WRU Division 2 West, Phillips’ Scarlets continue their URC duties after an excellent 35-10 victory over Glasgow Warriors last weekend.

Peel’s charges are now flat out until the end of April, a run which includes rescheduled matches in South Africa against Cell C Sharks (March 11th) and the Bulls (March 18th) after the initial games were postponed due to travel restrictions caused by Covid-19.

Having also kept a close eye on his fellow Wales U20s graduates - Adam Beard and Owen Watkin - during the Six Nations, Phillips will be across the international and the club game this weekend as the Scarlets look to end the season on the front foot.

And even after only half an hour of talking over the phone, it isn’t a surprise to hear that Phillips is upbeat about the rest of the campaign.

“The aim is always to win as it is for anyone. Any coach, any player, the first answer is going to be to win. Everyone is on the same page.

"It is a positive environment. Everyone knows the direction we are working towards so it will be exciting to see how we get on.”