Tom Parton: "To win the Six Nations again would be a moment I would cherish for a very long time.” 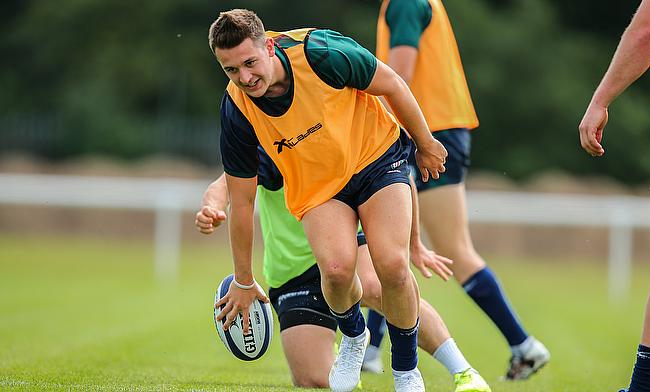 London Irish’s Tom Parton speaks to TRU about his journey to the Exiles and going for glory with England U20s.

It is one of Tom Parton's final answers which highlights his ambition.

What can you achieve this year? Can you win the Under 20 Six Nations and the Under 20 World Championships in 2018?

He didn’t give it a second thought. “We are confident that we can hopefully end this cycle with smiles on our faces,” he says. “If we were to do it, then that would be such a fantastic achievement."

Fans of English rugby will be hoping for a triple Six Nations success over the next couple of months and Parton is no different.

Your England U20 team to face Italy U20 in Gorizia this Friday ??

He was one of England’s young, exciting new talents who played his part in another positive year for the U20s in 2017 and the full-back’s elevation is continuing. His route upwards with club side London Irish is coming along nicely. Initially, putting in the hard graft and gaining the rewards in the academy, Parton has represented Championship side London Scottish this season whilst also still being involved in Nick Kennedy’s plans.

“I have played a few games with London Scottish this season,” says Parton. "It has been a great learning curve working with Dave Morris and Jake Sharp. It is a great brand of rugby they like to play there. They like to throw the ball around in the right areas and it is great to watch and more importantly, to be a part of. It is certainly something that is helping me develop and it is at a great level. It is good to get that game time.

“I am really enjoying my time at Irish as well. It is a really positive place to be and considering last year was my first year really experiencing a professional environment, to get promoted from the Championship was the cherry on top. I think it is a club which has got great ambitions in terms of where we want to be and more exciting for me, is the part I can play in getting us there.

“Obviously, we are in a bit of a tough patch and we are aware of that, but we are pretty confident and positive that we can turn it around. We just need to get some momentum and I am sure the wins will come.”

After a flurry of appearances for London Scottish towards the end of last year, including a try against Nottingham, Parton was recently selected for London Irish’s fixture away at Krasny Yar as the Exiles ended their European Challenge Cup campaign with back to back wins and this was once again another small victory for the full-back in his development.

“Working with Nick and his coaching staff was massively encouraging at U18 level and it is great that I am able to work with them again and push for opportunities," he said. “They have a really close relationship with me so they know my strengths and weakness and that is a massive plus point for me.”

His journey to this stage in his career has been a “smooth transition” as Parton puts it. After enjoying football, athletics and swimming whilst at Oratory Prep School in Reading, his decision to pursue a career in rugby became a realistic possibility when he attended Wellington College. “Kevin Brennan really helped me highlight my potential,” said Parton.

“Kevin was a player at London Irish when I was at Wellington so he was able to get me a trial here when I was about 14 or 15. I then progressed through the ranks from that point on. Winning the U18 Premiership was huge for me and knowing the academy was one of the best in the UK was a massive positive.

“Of course, my family have helped with my progression too. My Dad, Andy, played at a decent level. He played for Coventry back in the day and he played for Harlequins and Northampton so he was really attracted to the idea of me playing rugby. My Mum, Clare, was just super happy about what I chose to do and she would back me 100 per cent regardless of what path I went down. My brother also helped me along and together, they continue to give me that positivity and energy.”

Now, Parton is preparing to make his family proud once again. Following his impressive performances for England U20s in last year’s Six Nations which included tries against France and Wales, the 19-year old has been selected for their opening match of the 2018 Championships against Italy on Friday evening.

His preparation for this Six Nations campaign begun in January when the squad met up for a training camp as England prepare to try a retain their title. “It is a new bunch of players and new coaches and to get relationships firing is critical for us if we want to do as well as last year,” says Parton, who has also represented England at U17, U18 and U19 level.

Excited for one last push ?? pic.twitter.com/kkaP1vGE46

“We had our first camp in the middle of January and that went really well. It is always a special and proud moment when you put on that white shirt and your name is announced in the match day squad. It is something you have got to cherish because you know it is not going to last forever so you take these moments as much as you can.

"It is such an exciting opportunity to part of the squad. We played so well last year, but we just missed out on winning the U20 World Cup in Georgia against New Zealand. We are now looking to play that high-tempo brand of rugby that hopefully attracts the audience but more importantly helps us get the result."

And Parton now has another chance to challenge for silverware with England.

“My immediate aims are to keep playing for Scottish and trying to get chances at Irish, said Parton, “But, with England, if we can go on and win the Six Nations again over the next few weeks and then the World Cup then it would be a moment I would cherish for a very long time.”