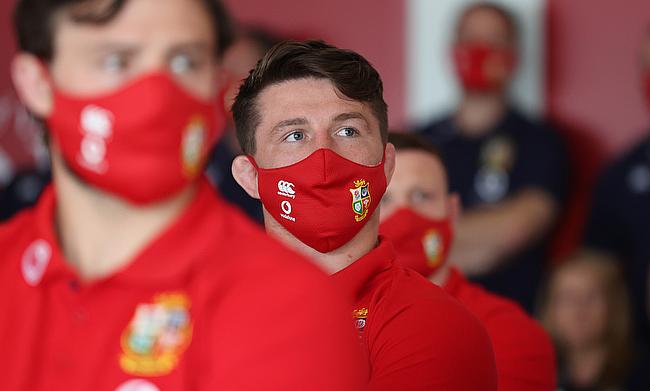 In the time that has passed since Tom Curry last played for England, there has been plenty of changes in Eddie Jones’ camp.

John Mitchell has departed the setup in order to take up the defence coach role at Wasps, with Martin Gleeson coming the other way as attack coach, whilst Anthony Seibold has arrived from NRL to replace Mitchell and Richard Cockerill is working alongside Matt Proudfoot as a forwards coach.

England failed to fire in the Six Nations, their campaign finishing with a 32-18 loss to Ireland in Dublin. Regardless of the team’s performance, Curry received a callup from Warren Gatland to represent the British and Irish Lions in South Africa, starting in each Test on course to a series loss at the hands of the Springboks.

“In terms of the overall experience, it was extremely special,” Curry, when asked about his time with the Lions, said.

“I’m sure without Covid it would have changed a few bits and bobs. It’s about when it comes to every game, you have to be pushing every single one. It’s about making sure those little moments make a huge difference to the game, and ultimately the final outcome.”

Still only 23, Curry now has 33 caps for England under his belt and has been a mainstay in the back-row under Eddie Jones. As a result, he is already regarded as one of the senior players in the England squad this Autumn Nations Series campaign.

There are four uncapped players in the squad selected for England this autumn, with Sale Sharks teammate Raffi Quirke, former teammate Nic Dolly, as well as Northampton Saints’ Tommy Freeman and Gloucester’s Mark Atkinson all hoping to make their international debuts in the coming weeks.

Freddie Steward, Marcus Smith, Harry Randall, Adam Radwan, Alex Dombrandt, Trevor Davison, Callum Chick and Jamie Blamire are all returners too, that eight having made their Test debuts against the USA and Canada during the summer.

Spending the last week in Jersey training, England have also been doing a host of team building activities. Whether this was a race on the English Channel or spending time with one another away from Jersey’s high-performance facility, Strive.

With this newfound responsibility, Curry says that his own leadership style is still developing at this relatively early stage of his career.

“Probably just not overthinking it,” he said. “I think you probably get a bit carried away with ‘you need to do this, this, this’. At the end for the day for me, you have to be playing your best game to be able to do any of that before you are able to do anything else.

“You have to be playing well yourself, so it is about not distracting from that and then how you get to that is being authentic and make sure that it comes across like that. There is a few different aspects you can work on to become a better leader.

“Getting help with that and being conscious of stuff like that, but it is not about changing who you are and what you are about, it is just about kind of adding a little bit.

By the time England’s game against Tonga takes place, the squad will have been together for the better part of two weeks. It is this relatively short time period that makes the time spent together in camp all the more important.

Before coming to the northern hemisphere, Tonga’s last game was a crushing 102-0 loss against the All Blacks and Mount Smart Stadium. Since then, they played out a 60-14 loss at Murrayfield on Saturday afternoon.

1900 supporters turned out for our open training session today ?? pic.twitter.com/Nl57lRyiVF

With games against Australia and South Africa following their clash against the Pacific Islanders, Eddie Jones and his staff will be hoping that this new group gels quickly. Jones himself has cited this autumnal campaign as the start of England’s bid to win the 2023 Rugby World Cup.

Curry was part of the same process in 2017, winning his first cap for England against Argentina that summer, before gradually getting more and more opportunities to play for his country.

Picking up a second World Cup is naturally England’s ambition, having fallen at the final hurdle against South Africa in 2019.

“The thought process of what we want to do and how we want to do it hasn’t (changed), but the personnel has,” Curry said. “The two days we had four weeks ago, the mini camp, was brilliant with everyone there.

“So, it wasn’t meeting everyone for the first time here. It is a really exciting time; training is pushing the limits, and everyone is jumping around. Sometimes when it is a 60% thing (training session), you have to remind people sometimes that that is the way it is meant to be.”