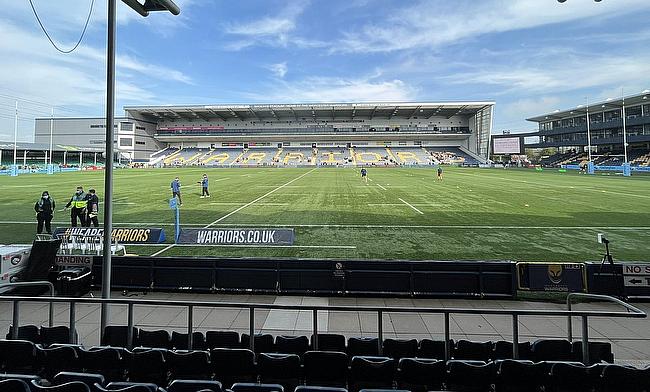 Match Centre: Sale Sharks 28-22 Harlequins
James Chisholm Exclusive: 'The mentality of the lads is that we are going to outscore you'
Dave Ewers Interview: ‘Last season was a tough pill to swallow’
Fijian Drua confirm coaching panel ahead of Super Rugby Pacific 2022 season

Leicester Tigers registered seven tries against Worcester Warriors on Saturday afternoon. Dominating the game from start to finish, Nemani Nadolo amongst others shined the brightest as the East Midlanders consolidated the first-place in the Premiership.

Leicester put Warriors to the sword at Sixways with this dominant performance in the West Midlands. George Ford set the side’s stall out early on, the England international slotting a fairly central penalty given away in the midfield.

Discipline was largely Worcester’s downfall, Leicester probing deeper with every opportunity. Harry Potter was the first to benefit, using his magic feet to evade Tigers attention and dot down beneath the sticks.

Billy Searle put Worcester on the scoreboard with a well-struck penalty, but it was bordering on halfway, signalling the difficulties that the hosts were having. A white, black and orange onslaught would follow, with Argentina duo Matias Moroni and Julian Montoya powering over.

Whilst the second half brought a brighter start for Worcester, again Johnathan Thomas’ side failed to convert. Whether it was a lineout five meters out or a tap and go, nothing seemed to come off and the familiar tale of Leicester dominance reared its head.

Part of the problem was an inability to bring down Nemani Nadolo, the Fijian superstar swatting defenders away as if they were flies, first feeding Richard Wigglesworth for a try and the pair combined again to send Nic Dolly over with 10 minutes left to play.

Freddie Steward had a try disallowed, but soon after Nadolo bagged a try of his own, putting the emphasis on how dominant tigers had become. With six minutes left on the clock, Freddie Burns pulled out his best Marcus Smith impression to score his team’s seventh, chipping the ball over the onrushing Warriors defence and collecting the ball in the in-goal area.

Just after the final whistle, captain on the day, Scott Baldwin, gave an honest opinion of his team’s performance.

“Embarrassing, really,” Baldwin said. “I can’t fault the effort of the team. The boys always give 100%, but we need to be a lot more accurate in what we do on both sides of the ball; defensively and with the ball in hand.

“If you look at that backline, some of the players we have got, if we can get them with the ball, in space, we know they are going to be deadly. We have got Duhan van der Merwe, who in the Six Nations made 47 clean line breaks. We just need to get him the ball on the front foot.”

Whilst Leicester were well and truly dominant, Steve Borthwick is hardly one to wax lyrical. So, after the final whistle, Leicester’s head coach was keeping his feet firmly on the ground when it came to his evaluation of proceedings.

“Obviously, I am pleased with many aspects of it,” Borthwick said. “I think in the second half, we were broken a little too easily, and gave too many penalties away that let them in. “To start the second half, we failed to take an opportunity, we gave a penalty away under their posts, a line break after that and we were on our own goal line for 10 minutes down to 14 men. For that 10 minutes, it was tough and you can’t do that.

“In a different game, you would get punished. So pleased with a lot of aspects of it, and there was plenty of periods in that second half that we need to fix.”