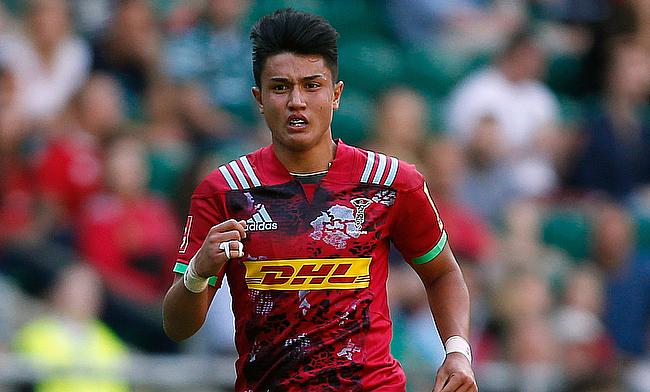 Marcus Smith finished on the losing side
©PA

Sale Sharks managed to score eight points in the final five minutes as they edged out Harlequins 28-22 in the latest round of the Gallagher Premiership at AJ Bell Stadium on Friday.

This is the first defeat for the previous season's champions in the ongoing campaign despite which they are at second place while Sale Sharks with their second victory are at fourth position.

The game was set up by a double from Raffi Quirke the first of which came early in the 13th minute when an offload from Cobus Wiese sent the scrum-half over the line and Kieran Wilkinson kicked the conversion to take the home side to a 7-0 lead.

The response from the Quins came three minutes later with Danny Care employed a quick tap after winning a penalty to touch down and Marcus Smith slotted the extras as the scores were levelled 7-7.

A 22nd minute penalty goal from Wilkinson put Sale Sharks into lead but they suffered a setback with Jono Ross sin-binned around the half-hour mark for a high tackle on Tyrone Green.

The Quins continued to exert pressure and were eventually rewarded in the 35th minute with Green collecting a pass from James Chisholm to dot down and Smith was spot on with the conversion making it 10-14.

Nevertheless, Sale ensured they headed into the break with a three point lead as Ross returned from sin-bin to crossover at the back of a dominant maul that Wilkinson improved.

The Quins were the first team to get off the block in the second half as they capitalised on a mistake from the home side allowing Luke Northmore to complete their third try but Smith's conversion went wide as the scoreline became 17-19 but a second three-pointer from Wilkinson once again put Sale Sharks back into the lead.

Wilkinson had a chance to extend Sale's lead but a couple of his penalties from him was off target as the gap between the teams remained at one point at the end of the third quarter. Wilkinson's misses proved costly for Sale Sharks as Smith kicked one from the tee in the 63rd minute to make it 20-22.

Wilkinson's struggle was evident as he missed another shot at the goal in the 69th minute and was eventually replaced in the 71st minute by Tom Curtis, who straightaway made an impact as he kicked a penalty goal in the 75th minute following another infringement from Quins making it 23-22. Any chance of a comeback from the visitors was put off as Quirke crossed the whitewash in the final minute for his second as Sale completed a 28-22 victory.

"Super chuffed, dead proud!"@SaleSharksRugby's Director of Rugby Alex Sanderson is delighted with his sides spirit and concentration, to stay in the game and see out a win against a formidable Harlequins side ??
#GallagherPrem pic.twitter.com/tfmu6nzlsQ