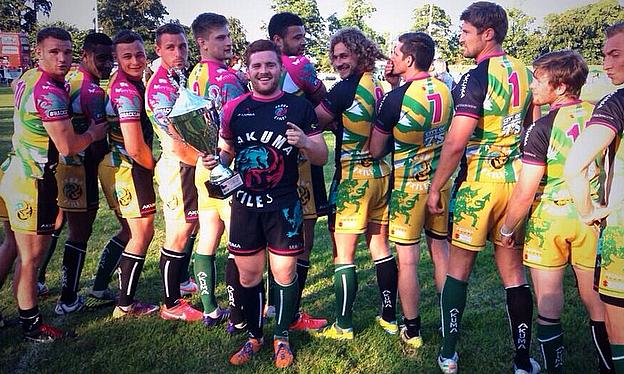 As sevens fever continues to sweep the nation the latest stop on a summer calendar packed with rugby was in the north of England at one of the region’s premier tournaments – the Chester 7s.

In traditional form the British summer of sevens kicked off with the Twickenham sevens weekend, as the best international sevens sides battled it out at the home of rugby.

A credit to the popularity of the short form of the game is the recent inclusion of rugby sevens at the Olympic Games, as the sport will take a place in Rio 2016.

Since the Twickenham weekend the party atmosphere – and fancy dress – has been carried around Britain to a number of different tournaments, from the beaches of Bournemouth to the Coastline of Kinsale.

This weekend saw the party travel to North of England and Chester, where the festival featured both Open and Social rugby competitions alongside women’s rugby, netball and an enormous amount of entertainment.

The men’s Open tournament was, as ever, the highlight of the day with 20 teams taking part. On display was some of the country’s best sevens talent alongside fully-fledged internationals, who culminated in making the day’s rugby a brilliant spectacle.

Some of the biggest names on the sevens circuit were at the event, with teams such as the Irish Exiles, Newitts Centurions, North Wales Exiles, Red Panda, Ellesmere Old Boys, several army teams and National league clubs Caldy and Sandbach, having feature over the years.

After a fantastic display of rugby in the group stages, which included the Barbados national team who were preparing to take to the field for the Commonwealth Games in Glasgow, the top two sides made their way into the semi-finals, with Akuma facing Sandbach and Red Panda pitting themselves against St Pauls’ Pirates.

With the showpiece event the only match left on the day it was reigning champions the North Wales Akuma Exiles who faced off against Red Panda.

In a brilliantly close final it was the Exiles who got out of the blocks quickest as they raced away into the lead with two tries.

In the second quarter of the game, just before the break, though, it was the Pandas who began to fight back and reduced the deficit to just a few points as the half time whistle was blown.

However, as was the nature of the first half, it was now the Exiles’ turn to be in the ascendency, and they capitalised on it well, extending their lead over the Pandas. A lead that in the end proved to be too great, as Akuma finally lifted the trophy as eventual 31-12 winners.

Team owner Marcus Copeland, who has taken the side to three finals already this season at the City of Manchester sevens, Caldy and now Chester, added: “yeah, it was a really nice festival for us and we really enjoyed it.

“It was great to go there, enjoy ourselves and be part of some great rugby.

“We went in there this weekend and really wanted to win it, but we went as well deliberately wanting to play some good rugby, do some exception stuff and then just have a bit of a laugh – it was a great weekend.”

In regards to the final, obviously it was Red Panda who the Exiles met and with a long history of competition between the two sides over the last few years, Marcus admitted that it was one he really wanted to win.

“We played them in the opening game and, to be honest, we did know a lot of the Panda players, having played with them a lot before.

“We knew they would be very physical in the game, so our plan was to spread it out wide, knowing they would come down the middle and luckily we had the pace to do that.

“We have some great players in our squad and luckily managed to just edge past a really strong fight from Panda. They managed to cut our pace down really well, but I think, overall, we won because we have always got a settled side.

“On the sevens circuit you don’t get to train in the week and a lot of players meet their teammates for the first time on the day. I think that’s where Red Panda have struggled this season we have been lucky, really, always being able to put out a pretty consistent squad of players.”

However, aside from the rugby, as with every sevens festival the day is also about the atmosphere, the entertainment and having fun.

The sun was out, the fancy dress was on, the music was playing and the rugby was underway, all of which culminated into a fantastic weekend.

“The weather over the weekend was fantastic,” said the event organiser Tom King, who first began the idea of the festival, “and we were very fortunate in that respect this weekend and in the run up to it.

“That enabled us to get the pitches up to scratch before to the best we could.

“There were great numbers of people through the gate on both days and everyone that we spoke to said that they were having a great time, with a smile on their face.

“We had 400 people camping, which the weather obviously helped with, and, yeah, I think from the feedback that we have had has been great and always really special to hear.”

Chester 7s is a multi-sport festival with rugby at the heart of it and Tom explained how important it has been to try and bring as much sevens rugby talent to the weekend as possible.

“It really was,” Tom began, “we had a number of past and present internationals playing throughout a few of the teams and the big talking point for us before hand and now was the inclusion of the Barbados national team, before they head over to the Commonwealth Games.

“But, to be fair, although they came with a weakened team, they did find the standard as the highest that they have faced so far this season.

“There were some great teams out there with the Red Panda team, the North Wales Exiles; Sandbach brought a fantastic side who were very unlucky not to beat the Exiles in the semi-final.

“So they standard was very high on the day and some of the rugby, to be honest with you, was breath-taking.”

Finally, it was Tom’s pleasure to reassure us that the tournament will continue again next year and will certainly return even bigger and better than ever.