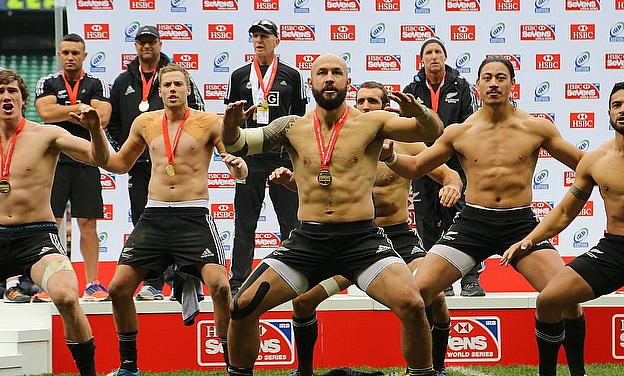 As the domestic rugby season reaches its conclusion, with the Aviva Premiership and Heineken Cup finals still to come, sevens tournaments are taking place across the country – Hear from England Sevens’ Callum Wilson and Sam Edgerley.

As the light lasts longer, the days get warmer and summer weather spreads across the country the shorter form of rugby comes to prominence.

The season kicked off at the start of this month when the IRB Sevens series came to English shores for the Twickenham Sevens weekend.

A mix of record attendance, a plethora of all possible types of fancy dress and an impressive performance for the home side confirmed that sevens fever has well and truly swept the nation.

Traditionally, the IRB Sevens would have come to a close now, with the New Zealanders claiming the crown in the last few weeks; however, this year is an exception: there is another tournament to enjoy, where it’s not about plates, cups or shields – it’s all about gold! The Commonwealth Games.

Glasgow is the fifth consecutive Commonwealth Games to host a rugby sevens tournament and New Zealand, having won the previous four, will be looking to keep their IRB sevens form going and make it five.

The All Blacks are certainly odds on favourites for the crown, followed by Australia and England, and also including IRB Series regulars: South Africa, Kenya, Wales and Samoa. For all of the best betting and odds in rugby, click here to visit our friends at 888sport.

A total of 45 games will be contested across two days of fierce competition at Ibrox Stadium in a fast and furious contest which requires teamwork, skill and stamina as two teams with seven athletes on the pitch go toe to toe for glory in games which last just 14 minutes.

IRB Chairman, Bernard Lapasset said that “for 16 years now Rugby Sevens has enjoyed being a key part of the Commonwealth Games.

“To compete alongside their compatriots in a multisport environment is a matter of huge pride and honour for our rugby players, who are making giant strides in this new Olympic era.

“We wish our Rugby athletes all the best in this magnificent international event."

Only this week, host nation Scotland reiterated the importance of the Commonwealth sevens in world rugby after selecting wingers Tommy Seymour and Sean Lamont – both Scotland full-international regulars – for the games above travelling on the summer tour to face the United States, Canada, Argentina and South Africa.

One side who will be looking to claim the final rugby sevens crown of the season will be England; who, with a fantastic, young squad, will be looking to capitalise on some of the promise they have shown this season and make Glasgow a ‘golden’ games.

Just a few weeks ago at the aforementioned Twickenham Sevens weekend, England accomplished one of the victories of the weekend when they charged past New Zealand on the first day to win 15-12; but then unfortunately lost in the Cup semi-finals to Australia.

A brand new multi-sport festival that took place at Manchester’s Broughton Park Rugby Club on the 10th of May, this year, featured some of the country’s greatest emerging sevens talent.

The elite rugby competition had eight teams, across two pools, including teams like Cyprus, Red Panda, Camarfen Warriors and the Akuma Exiles, with Samurai the eventual winners.

Hear what Callum and Sam had to say about the brand new tournament and their summer sevens plans.

The nest stop for the British sevens circuit, though – before the commonwealth travels to Glasgow – is the GB7s tour.

A competition which sees Britain’s best rugby sevens players pit themselves against each other, across six teams and three different stages, starting with the first at Saracens’ Allianz Park in London this weekend.

Following this on the 31st of May the GB7s party travel to Meggetland, Edinburgh and then to the finals at Eirias Park, Colwyn Bay on Saturday the 7th of June.

Who will be crowned the Champions of Britain?

Will Saracens be able to continue their brilliant 2014 form so far and re-take the GB7s crown?

Or will a new team on the tour, the England IPF7s, take the spoils?

Stay tuned to Talking Rugby Union for the answers to all of these questions and much, much more.

Make Talking Rugby Union your home of all things sevens rugby, whether the Commonwealth Games, GB7s or sevens festivals, we at TRU will bring you all the latest scores, reaction and analysis.