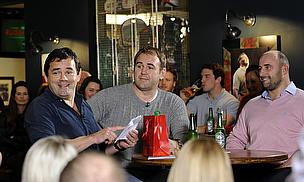 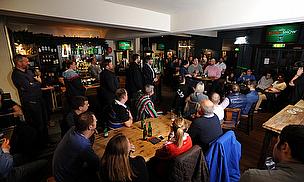 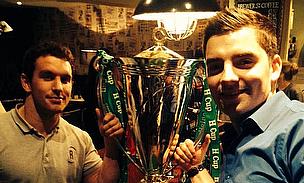 Talking Rugby Union's Max Skofic and Austin Halewood, behind the scenes with the famed trophey
©TRU 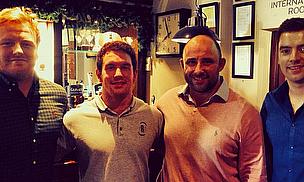 Here it is again, an early Christmas present courtesy of Talking Rugby Union and Heineken - the second episode of the Heineken Rugby Show.

After another two rounds of enthralling European Rugby action, Talking Rugby Union travelled to Twickenham and the world famous Cabbage Patch Pub, just a stones throw from the home of rugby, for the filming of the show.

Talking Rugby Union have been long-time supporters of Heineken rugby, having worked closely with the Heineken Kinsale Sevens tournament since 2011 and as a result of this were invited to London to be part of the filming.

This time the Show’s host Will Carling and the inimitable Scott Quinnell were joined by Special Guest Host, former Saracens and Bath Prop, David Flatman.

The episode features Scott’s breathless 30 Second Round Up of all the Heineken Cup action from Rounds 3 and 4, a certain someone’s Sports Personality of the Year nomination is revisited and all three host’s tackle questions from fans on Twitter and in the audience.

Talking Rugby Union went behind the scenes and infront of the camera for the filming. Make sure you look out for our creative director Max Skofic and his 'question of the night' about club initiations...

The evening was a tremendous success with the best analysis of the last two rounds, insight into life as a proffesional rugby player and stories from on and off the field.