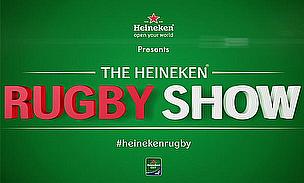 Here it is everyone, the third and final instalment of the first ever Heineken Rugby show.

Rugby Legends Will Carling, Matt Dawson and Scott Quinnell continue their discussion of all things Heineken Cup at the world famous Cabbage Patch Pub, just a stone’s throw from Twickenham Stadium and the home of rugby.

In this third and final instalment find out which famous friend Matt will be calling? The clue is Ben Cohen and Will tackles your twitter questions.

You’ll have to watch to find out…

Talking Rugby Union have been long-time supporters of Heineken rugby, having worked closely with the Heineken Kinsale Sevens tournament since 2011.

We at TRU wanted to take this opportunity to bring you part one of the first ever episode of the Heineken Rugby Show.

Both Heineken Rugby and Talking Rugby Union will bring you the best insight into this year’s competition from the experts that know best.

The episode is the first of a regular four-part feature, discussing all the hot topics of the 2013/14 Heineken Cup.

Tune in to Talking Rugby Union tomorrow to see the third and final part of the first episode, and wet those appetites before the next round of the Heineken Cup begins at the start of December.

Over the coming weeks Talking Rugby Union are hoping to keep bringing you more episodes of the Heineken Rugby Show throughout the season.

For much more on all the latest news stay tuned to Talking Rugby Union and follow @TalkingRugbyUnion on twitter.