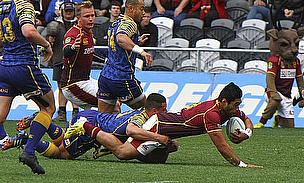 Finally, after months of waiting, it was time for rugby in the southern hemisphere to roar back into life again with the opening of the 2014 Super Rugby season.

In the first round of the competition there are only two games on offer, both in South Africa and the same conference as the Cheetahs welcome the Lions and the Sharks host the Bulls.

Although, it seems a shame that the pinnacle of franchise rugby in the Southern Hemisphere starts with only two matches in one of the conferences, surely scheduling should be fixed so such a messy start can be avoided next year.

First up, the Cheetahs host the new promoted Lions.  The Cheetahs surpassed expectations by making the finals last season and are hot favourites against the Lions combination who will struggle in 2014.

However, the competition began with an upset, though, as the Lions roared to an incredibly close-fought 21-20 victory over the Cheetahs, courtesy of a last minute drop-goal from Marnitz Boshoff.

The Cheetahs faithful will be disappointed following their defeat given that they will have seen the Lions as a match they could claim the points from, but Boshoff had other ideas as he held his nerve better than his opposite Elgar Watts who missed a late penalty.

This match will hardly go down as a great spectacle – a typical early season game, but the Lions fans won't mind, especially given their predicted struggles in this year’s competition.

On the other hand, With Jake White now at the helm of the Sharks fresh from taking the Brumbies to the Super Rugby final in 2013, then it is looking like he could be the missing piece in the jigsaw puzzle for the Durban based franchise.

The Sharks look like the strongest South African franchise on paper and assuming they get some luck with injuries, there is nothing to stop them winning the 2014 Super Rugby competition.

First they must get past a young Bulls team without Morne Steyn.  The South African teams hate losing to each other and there will be plenty of bloodshed when the Sharks host the Bulls at King's Park.

The Natal side lived up to their hype with a convincing 31-16 victory in the first round; with Patrick Lambie stamping his class on this game with a try, two conversions and three penalties.

The home team was helped by a useful TMO decision, which awarded Cobus Reinach a first half try from a knock-on. Conditions were greasy with high humidity for this match and so when Lambie crossed for his team's fourth try and a bonus point, the home fans were satisfied.

The Bulls fought hard and improved in the second half with the help of the experienced Victor Matfield.  His experience will be crucial for the young Bulls pack.