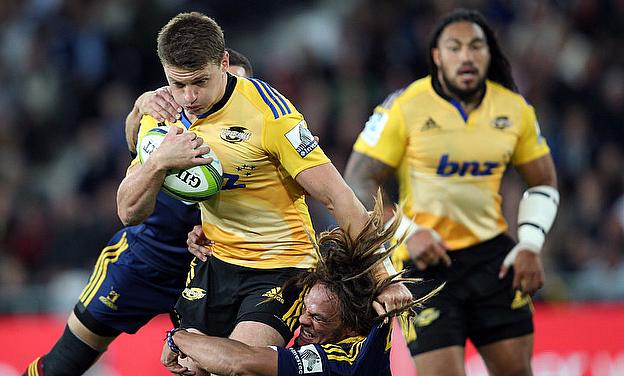 Beauden Barrett has been in blistering form for the Canes
©PA

With the regular season now over and the finals just around the corner, it only seems right to take a look at the Super 15 team of the season based on the fantasy rugby site www.testrugby.com.

To summarise, the team of the competition is chosen by the average points per game of each player. It is also based on the player getting into the top 20 in their position and having the highest average points which focuses on stats in certain categories.

The categories are quite straightforward with sections such as tries, assists, go forwards, tackles, turnovers, lineouts, scrums, line-breaks and kicks caught all included.

Usually, players that play the most minutes in the season get in this team. This does allow players from other teams which don’t have much strength in depth to make the squad.

One of the key positions this year was fly-half, but it was Beauden Barrett who got the nod ahead of Bulls’ Handre Pollard, Sharks’ Pat Lambie and Bernard Foley from the Warathas.

This was down to Barrett’s goal kicking as he scored twice the number of points of the best scrum-half; TJ Perenara – who is his team-mate at the Hurricanes.

Due to the way the Hurricanes have played this season, it doesn’t come as a real surprise to see this halfback pairing in this team of the competition.

The best player of the Super Rugby 15 season was Duane Vermeulen. The forward will be leaving this competition for the 2016 campaign after he agreed to sign for European Champions Cup Winners Toulon on Thursday.

Behind Vermuelen were Barrett, Pollard, Jaco Kreil from the Lions, the Brumbies’ Christian Lealiifano and Waisake Naholo of the Highlanders.

The Stormers are in action this weekend in the playoffs against the Brumbies and they will certainly struggle without Vermeulen who has only played 11 games this season.

One of the most interesting points about this team is the fact that there is only a few well established internationals which have been included.

It will be very interesting to see if any of the fringe international players that have performed so well in Super Rugby will get into World Cup squads.

Super Rugby 2015 Team of the Competition by country

Do you agree with the Super Rugby 2015 Team of the Competition?
Forwards:
Hooker