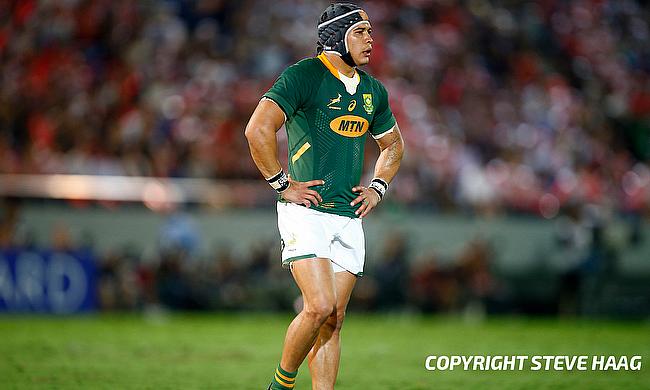 South Africa came up with a seven try performance as they eased past a 14-men Italy with a 3-44 victory in their Pool B World Cup encounter in Shizuoka on Friday.

The win has taken South Africa to the top place in the table with 10 points and will face Canada in the final game of the round. Italy also have 10 points from three games but will have to lock horns with New Zealand in the final game.

Italy skipper Sergio Parisse went on to make his 142nd Test appearance going past Brian O’Driscoll's tally of 141 Tests to become the second most capped player in the history of the game. Only Richie McCaw with 148 Test caps is above the 36-year-old.

Italy suffered a setback early in the game when Simoni Ferrari left the field with a hamstring injury in the second minute and the Boks capitalised on the momentum with Cheslin Kolbe racing past the Italy defence to touchdown inside the corner post. Handre Pollard kicked the conversion to make it 7-0.

Italy got a chance to open their account after Bongi Mbonambi was penalised for not rolling away and Tommaso Allan kicked a ninth-minute penalty goal to reduce the gap to four points. As South Africa launched another attack, they were rewarded with another penalty kick from Pollard to restore the seven-point lead.

The injury woes continued to hamper Conor O'Shea's side as Marco Riccioni, who came in as a replacement for Ferrari left the field with a rib injury in the 19th minute and eight minutes later South Africa scored their third try with Mbonambi diving over the line on the back of a driving maul. A conversion from Pollard meant the teams ended the first half with a 3-17 scoreline.

Italy's chances of a second-half fightback was hampered as they lost Andrea Lovotti to a red card in the 43rd minute for a tip tackle that reduced them to 14-men for the remainder of the game. Despite, the setback Italy held the possession but a series of infringements presented the Boks with a penalty chance that was kicked cleanly by Pollard in the 51st minute making the scoreline 3-20.

The numerical disadvantage eventually went against Italy as Kolbe sped to the try line for the second time in the game in the 53rd minute and five minutes later South Africa went on to claim the much-needed bonus point with a try from centre Lukhanyo Am. This time Pollard made no mistake on the conversion taking their lead to 3-32.

Erasmus' men were in complete control of the game and they further extended their lead with their fifth try in the 68th minute coming from Mapimpi that was improved by Pollard making it 3-39. Five minutes later, Mapimpi could have got his second but was stopped metres from the try line as the Boks looked dangerous with the full time approaching.

South Africa never took the pedal off their accelerator and their unrelenting pressure on Italy was rewarded with RG Snyman crossing over in the 76th minute and in the added minutes Malcolm Marx dived over the line to complete a 3-49 victory to strengthen their hope of a quarter-final berth.