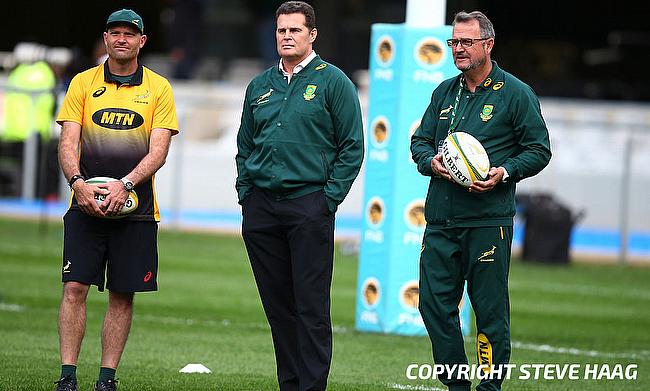 South Africa head coach Rassie Erasmus described the 32-19 defeat to Argentina in Mendoza on Saturday as "unacceptable" and "terrible".

The Springboks had a bright start under Erasmus after beating England 2-1 at home during the June series and also kick started the ongoing Rugby Championship tournament with a 34-21 win over the Pumas in Durban.

However, their momentum fell apart in Mendoza last weekend when Mario Ledesma's men bounced back with a terrific first half display from Bautista Delguy and Nicolas Sanchez to end their 11-game losing streak.

"This was a terrible performance - it was unacceptable and we cannot perform like that in a Springbok jersey," said Erasmus after the game.

"It is not just the players' fault, I am the coach and I must make sure we don't perform like that. We are all disappointed - not just with the defensive effort but in the first 15, 20 minutes we had so many opportunities to score tries.

"We did not capitalise on it and we look like a team playing club rugby. I must point the finger at myself - when you play like this then the coach must be doing something badly wrong during the week."

The defeat has put South Africa's Rugby Championship campaign in a spot of bother as they now face an uphill task of locking horns with Australia and All Blacks in the next two rounds and Erasmus is wary of the task ahead.

"We have to turn it around - we had certain plans we wanted to try against Australia but that is out the window now. We have to get back to winning ways and it is win at all costs now.

"This loss puts us back quite a bit. We wanted to win this game and then give a few guys a chance against Australia.

"We can't do that now, we lost - so now we have to beat Australia."