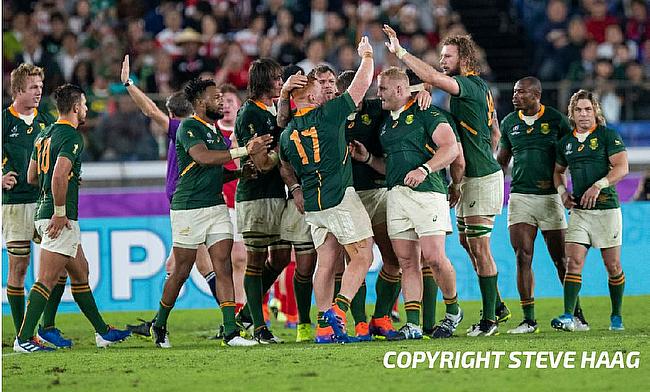 England had no answer to South Africa's power as the Springboks clinched the their third Rugby World Cup with a 32-12 victory. Joe Harvey delivers his verdict as Eddie Jones's side fall at the final hurdle.

Whilst England were the favourites coming into this game, it was South Africa that took home the Webb Ellis trophy by dominating England in Yokohama.

As World Cup finals tend to be, it was a cagey affair. The first half was symptomatic of this with South Africa taking full advantage of England early on, leading 12-6 when Jerome Garces blew the halftime whistle.

Things looked like they could have been in England’s favour when South Africa’s fly-half Handre Pollard missed a penalty within two minutes, giving English fans some hope that it would be their day. Less than a minute later England’s Kyle Sinckler was removed from play after a collision with the hip of Makazole Mapimpi knocked the tighthead out.

Dan Cole replaced his former understudy and was then put to work against Tendai Mtawarira. Owen Farrell then gave the advantage to South Africa after holding on at the ruck, giving Pollard an easier kick to make it 3-0. It would be 3-3 some moments later after Cheslin Kolbe went off his feet to give Farrell three points to kick-start his evening.

South Africa’s dominance at the scrum continued when Cole was pinged, allowing Pollard to nudge his side in front once more. England then had some consistent pressure, carrying the ball over 20 times in the South African 22, yielding no reward other than a penalty. Honours even once more.

South Africa then got a clear advantage at the break. Pollard kicked two successive penalties after English mistakes, giving the Rainbow Nation one hand on the Webb Ellis at the interval with a 12-6 lead.

After the restart, England made a change with George Kruis replacing Courtney Lawes. Several minutes into the second half, Rassie Erasmus replaced his starting props. Some seconds later that move had reward, with a penalty being won and kicked by South Africa to give them breathing space.

??"We never felt alone here in Japan. We felt our fans support all the way. We love them and can't wait to get back home."

The introduction of Joe Marler for England then won them a scrum of their own. Similarly to South Africa, England opted to kick this, making the score a much more manageable 15-9. A miss from Farrell would follow, leaving many an Englishman fearing the worst.

England would not make the same mistake twice, Farrell slotting a penalty following South Africa’s own three-pointer to keep the scores close at 12-18. After Pollard’s missed penalties, England could see a glimmer of hope.

However, their World Cup dreams were dashed and defensive errors would confirm that. The Springboks created history to score their first try in a World Cup final. Mapimpi’s chip through was collected by Lukhanyo Am, who proceded to send the wing over the whitewash, allowing for a fairly simple conversion by Pollard. 25-12 and South Africa’s to lose. And they wouldn’t.

Repeated errors from England handed South Africa the ball time after time, with Kolbe taking full advantage. The diminutive winger danced through after receiving a loose ball, the Tolouse man stepped his way over the tryline to hand South Africa their first World Cup in 12 years.

After a tense final few moments, South Africa remained the better side, keeping hold of the ball and not letting England get a sniff. When the ball was kicked out, arms were raised and a nation may be united once more as the Springboks clinced their third World Cup.

Eddie Jones’s side were not at the races all day. Arriving to the stadium late, England almost looked as if the occasion was too big for them. Flustered with ball in hand, South Africa’s defence harried England consistently, handing the Boks possession far too consistently.

The scrum was an area for concern throughout the game. Dan Cole could not handle the pressure from Tandai Mtawarira or Steven Kitshoff the entire game and even Mako Vunipola and Joe Marler struggled. As a result, England gave away penalties or were on the backfoot when trying to get attacking ball.

Missed chances also played their part. A 20 plus set of phases were not made the most of, leaving some scratching their heads as to why the English couldn’t take the points. At the end of the day, England could not replicate their semi-final showing.

What a day for South Africa. The side absorbed all of England’s pressure, dealt with the kicking game and were deserving of a third World Cup victory in Japan. What was easily the most important part of the South African machine was their scrum.

When Tendai Mtwawrira and Frans Malherbe are going full throttle, they are the best in the world and with replacements like Steven Kitshoff and Vincent Koch, things were never going to be easy for the English.

Tries from Makazole Mapimpi and Cheslin Kolbe really put a fine finish on South Africa’s win and showing how dominant South Africa were in the loose, dragging defenders in and allowing the wings to attack into space. Kolbe’s fitness must have been incredibly beneficial to the South Africans too, his try formed from virtually nothing.

TRU heard from World Cup winner Joel Stransky earlier this week and the former fly-half was keen to emphasise how a win today could unite the country once more. Some 24 years on from Nelson Mandela handing over  the trophy to Francois Pienaar, it was fantastic to see South Africa’s celebrations. Sport has the power to change the world.