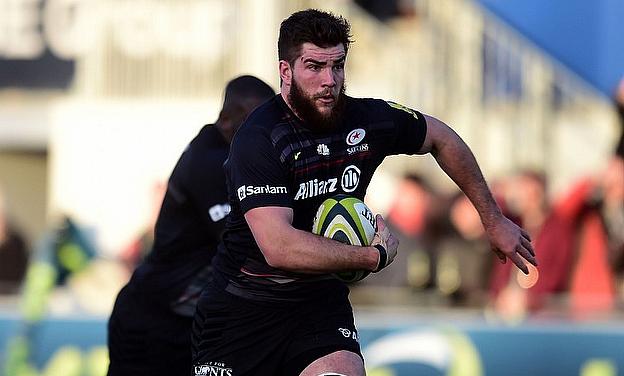 Saracens booked their place in the LV= Cup semi-finals thanks to a 35-18 victory over Exeter at Allianz Park.

The Chiefs arrived in north London knowing they had already done enough to reach the knockout stages but Mark McCall's side needed a victory to overtake Gloucester at the top of Pool 1.

Sarries will host Northampton at home in the last four while Exeter will now have to travel to Welford Road to take on Leicester for their semi-final encounter.

Exeter crossed through Sam Skinner and Tom James while fly half Ceri Sweeney added eight points from the tee.

After a massively physical opening quarter, Saracens broke the deadlock with their customary rush defence creating the first try of the afternoon.

Young Exeter centre Max Bodily took far too long with his clearance kick, allowing opposite number Streather to charge down his effort and race over for the home side's first try. Spencer knocked over the conversion as Saracens established an early 7-0 lead.

Saracens soon had their second try when blindside flanker De Jager cantered over in the right corner. Spencer once again added the extras from the tee to cap off a dream start.

But the reigning LV= Cup champions showed their fighting pedigree and struck back in the 31st minute with number eight Skinner crashing over from the base of a powerful Exeter scrum near the Sarries whitewash. Sweeney fired over the conversion to bring the away side right back into the contest.

Sweeney landed a long-range penalty to make it 14-10 just before the break after fine play from the Chiefs pack forced another penalty at the breakdown.

The Chiefs' renaissance continued on the resumption with Sweeney stepping up to narrow his side's deficit to just one point after Sarries tighthead Biyi Alo was penalised for not rolling away at ruck time.

Exeter took the lead in the 50th minute with a try of the highest quality. A solid Chiefs scrum allowed flanker Tom Johnson to break down the blindside and feed scrum-half Dave Lewis, who released winger James to touch down. Sweeney hit the post with his conversion attempt as Exeter established an 18-14 lead.

Saracens were under immense pressure and sent on England international Alex Goode from the bench in a bid to turn the tide of the game, and he had an immediate impact when he put De Jager over for this second try of the afternoon.

Sarries were rejuvenated and had another try soon after with Spencer putting Romanian winger Fercu over in the left corner. Spencer nailed the touchline conversion as the home side raced out to a 28-18 lead with 20 minutes of the contest remaining.

Sarries made the result safe as openside Hankin crashed over off a powerful maul for his team's fifth try of the afternoon.