Seb Negri Column: I think it is an exciting opportunity for young players to put their hands up 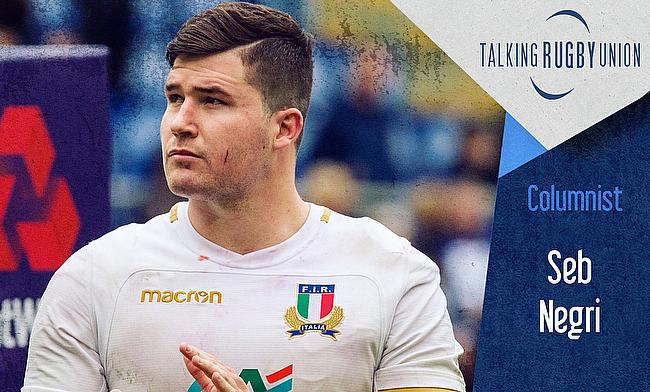 Italy legend Sergio Parisse set to retire from international rugby during Six Nations
Franco Smith to be in charge of Italy in Six Nations 2020
Conor O'Shea steps down as Italy head coach
Seb Negri Column: South Africa gave a lot to my family

In his first column of the Six Nations period, Seb Negri talks about life under a new head coach, his hopes for the future of Italian rugby and missing familiar faces.

It is different. Leo (Leonardo Ghiraldini) and Sergio (Parisse), they were both such experienced players and not having them around is very different. You can definitely feel that their presence is not here, but as much as it is sad not having them around, I think it is an exciting opportunity for a lot of young players to put their hands up and showcase what the future of Italian rugby holds.

Excitement is the overriding feeling

Excitement is definitely the word I would use to describe how we are feeling right now. We are in a transition phase, but a lot of these young guys that have been called up, they have been waiting for their opportunity for some time now and they are really looking forward to testing themselves in the Six Nations. Hopefully that excitement will help us get some results.

Our Italian isn't the best, but we think that this means that there are three former @HartpuryRFC players - and two former students - in the @Federugby squad of 35 ahead of the @SixNationsRugby

Obviously, them slotting into the squad is not going to be an overnight fix. For many of the boys, it will be their first experience of international rugby and they need to experience this level first before we push on. It’s a big jump from playing club rugby to the Six Nations, but they feel that they are ready for it and their performances at club level suggest that too.

Learning from Sergio and a welcome to Franco

I think one can look forward to the future of Italian rugby. We have all learnt an unbelievable amount from the likes of Sergio and Leo over the years, but now we have to take responsibility and move forward, with us youngsters putting our hands up a bit more.

We also have a new head coach here at Italy. Franco Smith came to us after heading up the Cheetahs team in the Pro 14 from 2018. Having played his team a couple of times, I was a bit excited to link up with him in camp.

Franco has got his own ideas on the game, his own identity, his own way of playing and he demands a lot from us. We have to be fitter, we have to be powerful and we had a hard training week last week, but it is exiting because it is something different.

It’s a completely new way of playing. It’s an exciting way as well. So, we are looking forward to it and this is certainly one of the most exciting periods in Italian rugby. But, like I say, it is not going to happen immediately or overnight, but it is an exciting period for sure.

Coming into a game against Wales in Cardiff is never easy. I remember when I was at Hartpury and we went there to play Cardiff Met and it felt like all of the crown there were against us. Playing at the Principality is like that but multiplied by 1000!

We just need to by physical up front. We know the threat that Wales pose, of course we do, but we have to throw the ball around and take the game to them. It is always tough when you play a quality side, but at the same time, we are under no pressure.

We want to showcase what we want to achieve and what we think we are capable of achieving. We are on a pathway and the direction we are going is forward and we will be displaying this with an exciting brand of rugby that showcases this talent that is coming through in Italy and is the future of the national side.