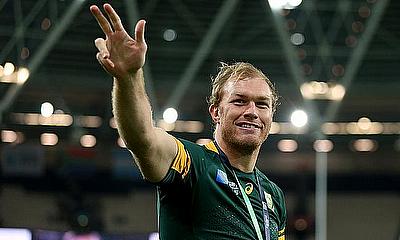 Schalk Burger will now head to Saracens for a two-year stint.
©PA

Veteran Springboks back-row Schalk Burger expressed his disappointment on ending his Super Rugby career with the Stormers with a defeat to the Chiefs in the quarter-final on Saturday.

Burger, who is among the elite list of players, who have played over 100 Super Rugby games, made his debut in the 2004 season.

The 33-year-old captained the Stormers last weekend against the Chiefs, but succumbed to a 21-60 defeat after finishing the group stage as the leader of Africa 1 group. The Chiefs ran an eight-try riot as compared to the Stormers, who managed just three.

Despite, having a disappointing end to his stint with the Stormers, Burger lauded the youngsters in the team and believes the club has a bright future going forward.

"Obviously I've got a lot of good memories at Newlands, and unfortunately tonight wasn't one of them," Burger said.

"Of course it hurts but you've got to have perspective. I think this year this team came a long way. We started off on a journey with a young side and I think we did remarkably well to get into a quarter-final."

Burger, who was named the IRB Player of the Year in 2004 will now head to the English Premiership club Saracens. However, he believes the end is not far from calling it a day.

Burger also admitted that having not faced any New Zealand side prior to the quarter-final clash against the Chiefs had an impact on the result.

"They've got a certain style at the moment, all the Kiwi sides, that's quite difficult to counter but I think next year will be positive for us that we're playing against them," he said.

"Once you start experiencing the style and adapting to it you get used to it, and we can catch up."

Burger has signed a two-year contract with the Saracens which will begin with the upcoming season.