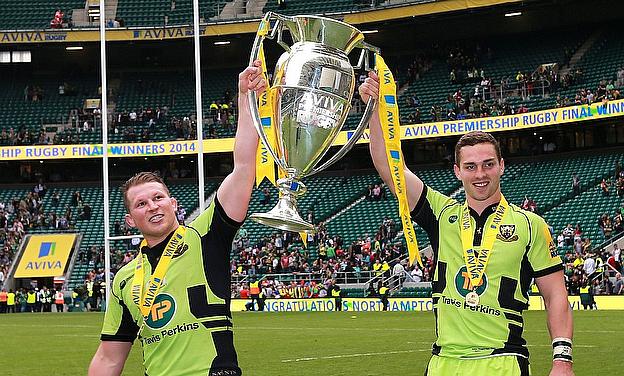 Northampton lost the game 37-17 to fierce rivals Leicester, then Hartley landed an 11-week ban and missed the British and Irish Lions' Test series-winning tour of Australia.

But the contrast from 12 months ago could not have been more pronounced, as he returned to action off the bench following two months out injured and helped Saints clinch a pulsating extra-time Twickenham triumph over Saracens through Alex Waller's try.

"After what happened last year, I have thought about this every day," said Hartley, the sizeable Premiership trophy at his side.

"I wake up in the morning and I think about this every day. I have been obsessed about it. Every ban, every injury, it makes it all worthwhile.

"It is just as good as I imagined. My heart was in my mouth at the end of the game. It could have gone either way, but Alex Waller - unbelievable.

"I can't explain the feeling, it is just emotional. You put that pressure on yourself.

"You obsess about something for a year and it finally goes your way. After all the setbacks and injuries, this comes your way. It is nice.

"We talked about being champions every Monday of the year and how we were going to get there, and now the victories on the road - the Worcester away, the Wasps away - it makes it all worthwhile."

Saints' triumph came just eight days after they won the Amlin Challenge Cup by beating Bath in Cardiff, ending the greatest season in their 134-year history.

"This is so important to the town of Northampton," added Hartley, who joined Saints from Worcester in 2005.

"Our club have been hunting it (league title) for years. For the last four or five years we have been there or thereabouts and not quite cracked on.

"This is testament to years of hard work and this year especially it has been a squad effort. We have an unbelievable squad.

"For whatever reason we didn't win last year, but we created history (on Saturday). It is not just the boys who played, it was a squad effort.

"We went a number of games unbeaten, we had the most tries scored in the league, the best defensive record in the league. Even if it came to the last play of the game, we deserved that."

Hartley confirmed how tense the closing minutes were as Northampton found themselves 20-17 adrift. An equalising drop-goal or penalty would have been enough to win, given Saints' had outscored Saracens on tries, but Waller ultimately put it beyond doubt.

And Hartley also paid tribute to his young front-row colleague, who is set to join him on a flight to New Zealand on Monday as players from Northampton and Saracens link up with Stuart Lancaster's England squad.

"Alex Waller comes on, he goes off with a cut to his eye, then he comes back on and battles through and scores the winner," Hartley said.

"For him to tour New Zealand - I have seen him progress through the academy - I feel a bit like a proud dad. He is the real deal.

"All along. I wanted to say that I was fit (after a shoulder injury). I have been good for 10 days or so now.

"Going out there, I was a little bit nervous. I usually don't get nervous, but I hadn't played for a couple of months. The selection was accurate - Mike (Haywood) deserved to start and I was more than happy to come off the bench and do what I did.

"How many minutes did I do? 50. I think that was a good warm-up. In terms of intensity, you can't replicate Test rugby, but if I was going to be prepared, then Saturday was the perfect preparation.

"I have had my medical checks and I am clear."