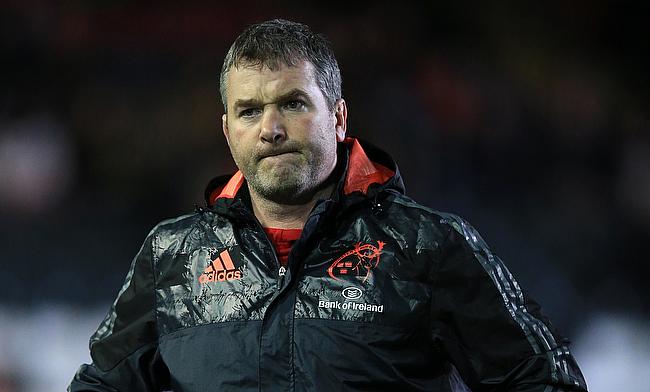 The rugby world has paid tribute to Munster's head coach Anthony Foley, who has died at the age of 42.
©PA

Tributes continue to pour in for Munster head coach Anthony Foley, who passed away last weekend in Paris.

The former Ireland captain was found dead in the team hotel ahead of Munster's European Champions Cup clash with Racing 92. As a mark of respect to Foley, the organisers decided to postpone the Sunday's game.

In his 10-year career, Foley has played 62 Test for Ireland and has captained them as well in three games while he was also part of the 1995 and 2003 World Cup squad.

His contribution to Munster was phenomenal as he went on to play over 200 games for the club and scored 195 points in it. He also led them to European Champions Cup victory in 2006.

And England's 2003 World Cup-winning coach Sir Clive Woodward said: "Shocked & so sad to hear about death of Anthony Foley. A true legend & a man who had total respect of teammates & opposition @Munsterrugby."

"He epitomises what Munster rugby is all about. It's absolutely shocking.

"I saw him in Cork and he was looking well. I thought he was enjoying his responsibilities in his Munster role. What happened is just absolutely tragic.

"He was steeped in Munster rugby, he was a skilful all rounder but rugby was always going to be his first love.

"He's had an unbroken involvement with Munster from an early age."

"Can't quite believe it. So incredibly sad. My thoughts are with Olive, his boys & and his extended family," former Ireland captain Brian O'Driscoll wrote on his Twitter account.

Former Ireland outside-half Ronan O'Gara wrote: " Alone on the couch with Jess. Heartbroken. We have lost an incredible man. Too sad to tweet further.. sleep well Axel. We love you..xxx"

Foley was appointed as the head coach of Munster in 2014 and chief executive Garrett Fitzgerald described him as a "great" of the game.

"Anthony was the embodiment of Munster Rugby and dedicated his life to the game he loved," Munster chief executive Garrett Fitzgerald said.

"From St Munchin's to Shannon, Munster and then Ireland, Anthony was a true rugby great."