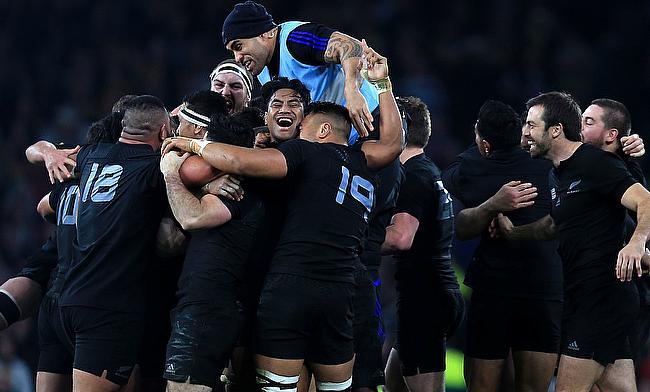 For the first time in its history, the Rugby World Cup was successfully defended on Saturday, with Richie McCaw doing what no other captain has done – captain his side to two RWC triumphs.

The All Blacks flirted with danger during Ben Smith’s sin bin period in the second half, but in all honesty, they never truly looked like relinquishing the Webb Ellis Cup, and ultimately emerged with a 34-17 victory over an impressive but overpowered Australian side.

McCaw, alongside Dan Carter, Ma’a Nonu, Conrad Smith and the rest of New Zealand’s old guard, was superb at Twickenham on Saturday, playing at a level which most other nations can only dream of and helped the All Blacks exert their dominance over their trans-Tasman rivals.

It was a scrappy first half from both sides, but in true Kiwi fashion, one moment of composure and skill was all it took for New Zealand to take control of the game heading into the interval.

Aaron Smith zipped a pass away behind the decoy runner, who managed, somehow, to draw four Australian defenders, and to the waiting Conrad Smith.

Conrad Smith then took an inside line, targeting the large opening created by the Australian defence’s almost magnetic attraction to the decoy runner. 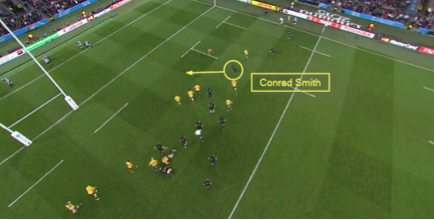 Aaron Smith then returned to the play in support of the centre and ran the perfect switch. Conrad Smith’s line drew the Wallaby defence (yet again). 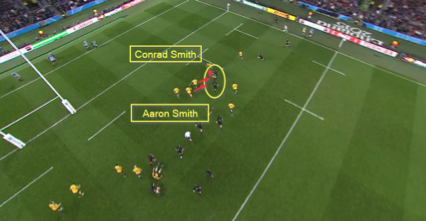 The switch created space for Aaron Smith, who was then facing a three-on-one with McCaw and Nehe Milner-Skudder outside of him. The scrum-half drew the last man, passed to McCaw and the captain had to simply ship the ball on to Milner-Skudder (cover defence had a chance of catching McCaw before the line) and watch as the young winger cruised over the line and gave the All Blacks the score their play had merited.

Clearly the fillip of Milner-Skudder’s late first half try was still enthusing New Zealand early in the second, as it was just a few short minutes before they were crossing the whitewash again.

If the first try had been all about the work of the Smiths in the build-up, then the second was all about Sonny Bill Williams. The centre, a half-time replacement for Conrad Smith, took the contact, freed his hands and offloaded to Milner-Skudder.

Milner-Skudder advanced the ball beyond the halfway line and then, just one phase later, Williams was involved again, once more freeing his hands after taking contact, this time drawing two men to the tackle, and finding the supporting Nonu. 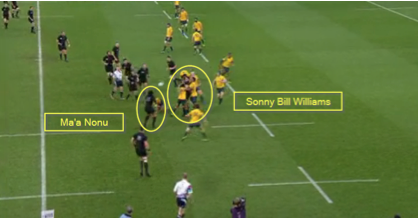 Nonu wove his way through the first line of defence and upon finding clean air, was confronted by Australia’s last line of defence, Kurtley Beale. A quick change of direction from Nonu almost juked Beale out of his boots and the inside centre was then free to run the ball in on his arcing line. 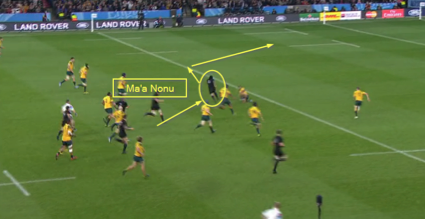 The resiliency of the Wallabies has to be praised, though, as they managed to fight back, closing the deficit to just four points with two tries of their own.

The indomitable David Pocock was the first to cross, harnessing on to the back of a maul and dropping over the try line and then, with New Zealand down to 14 men, Australia threatened to take control of the game.

Adam Ashley-Cooper spotted the space behind the New Zealand defensive line, thanks in large to Ben Smith’s sin bin period, and called for Will Genia to box-kick.

Ashley-Cooper recovered the ball amidst heavy competition from New Zealand and, as the antipodean sides do with such aplomb, had a support runner ready and waiting for the ball in the form of Tevita Kuridrani. The bruising outside centre was then able to run in the try without too much difficulty.

It brought Australia to within four points but unfortunately for the men in gold, the momentum pendulum swung once more in New Zealand’s favour.

A late Beauden Barrett try added gloss to New Zealand’s victory, but it was fitting that it was Carter, in the preceding 10 minutes to that try, on his last appearance for the All Blacks, who put the final nails into Australia’s coffin.

It won’t be remembered with the same reverence as Joel Stransky’s effort in 1995, nor Jonny Wilkinson’s in 2003, but Carter’s 69th minute drop goal was exquisite. 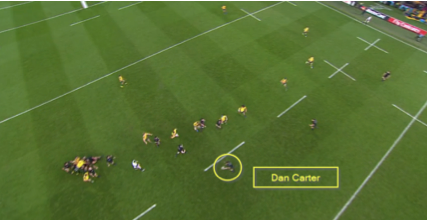 He received the ball about 42 metres out, had to step back inside onto his favoured left boot and, with no time to set himself properly or wind up the kick, snapped a pristine kick off in the face of three Wallaby defenders. That drop goal, combined with a long-range penalty that Carter knocked over a few minutes later, put New Zealand clear and secured their title.

The victory has set new benchmarks in rugby. New Zealand have now won the competition a record three times and even with a whole host of players set to step down from international rugby, already look in superb shape to add a fourth in Japan in four years’ time.

The two remaining Smiths, Aaron and Ben, will become the team’s elder statesmen, alongside the likes of Kieran Read, Sam Whitelock, Brodie Retallick and Julian Savea. Milner-Skudder will continue to grow in importance, whilst the likes of Malakai Fekitoa and Barrett will now be afforded the opportunity to make starters’ jerseys their own.

The gauntlet has been thrown down to fellow winners Australia, South Africa and England, all of whom need to up their games considerably, whilst the likes of Ireland, France, Argentina and Wales must feel as if it’s harder than ever to break their own ducks at the tournament.

There will be plenty of time over the next four years for those sides to fine-tune and analyse their own approaches, but for now, let’s just enjoy everything this New Zealand side has brought to the game over the last few years and celebrate a number of individuals who have redefined the game we all love so dearly.