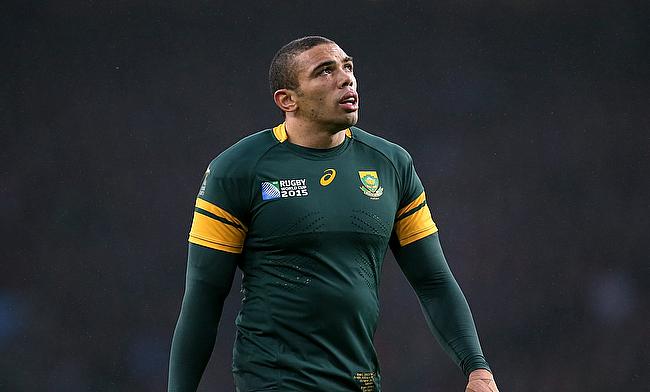 South Africa secured third place at this year’s World Cup after a 24-13 win over Argentina, but winger Bryan Habana was unable to break the all-time try-scoring record.

JP Pietersen dotted down in the first half for the Springboks and Handre Pollard’s boot gave South Africa a 16-0 lead at the break before Nicolas Sanchez eventually got Argentina's first points of the evening.

Eben Etzebeth’s try midway through the second 40 ended any fightback from the Pumas, but Juan Pablo Orlandi went over in the final play of the game for Argentina - who have been excellent this tournament.

The only disappointment on the evening for South Africa was that Habana spurned three first-half chances to claim the all-time World Cup try scoring record.

The 32-year-old came very close ealy on, but was denied by the hand off Argentina full-back Lucas Gonzalez Amorosino as they both went after a kick.

It was clear the record was in the mind of Habana as he went into this game level on 15 tries with New Zealand great Jonah Lomu as the winger knocked the ball on on two occasions later in the half.

Habana then had a quiet second 40 and was eventually taken off with 13 minutes to go to a standing ovation from the crowd inside the Olympic Stadium.

South Africa began the game on the front foot as they crossed for the only score of the first period moments after Argentina's scrum-half Tomas Cubelli was sin-binned for a high tackle.

Pietesen went over in the corner to go level with Habana as both players ended the tournament on five tries each. Pollard added the extras.

Argentina then controlled possession, but they just couldn’t break down South Africa whose sheer power played a huge part in their victory.

In truth, the Boks would have been home and dry if Habana could have finished off the chances he was presented with.

Firstly, he lost out in a foot race with Amorosino who beat Habana to a loose ball in the Pumas’ try area.

Then the Toulon winger knocked on after a break and looped pass by Pollard and the record remained intact when Horacio Aqulla – on his final appearance for Argentina – halted Habana after a good infield chip by the Boks.

While, Habana couldn’t find that clinical edge, Pollard kept the scoreboard ticking over as Argentina were punished for ill-discipline at the breakdown on numerous occasions.

After half-time, it was the Pumas who started the better as Sanchez slotted over a superb drop goal, but the Springboks responded immediately.

Schalk Burger – who was excellent all evening along with retiring skipper Victor Matfield and Francois Louw - turned over the ball before finding Matfield.

The Boks then worked the ball left before Etzebeth slid into the corner.

South Africa extended their advantage as Pollard nudged over his fourth penalty and with a 21 point lead, Heyneke Meyer’s men were in complete control.

Sanchez took his tally to 95 points  for the tournament thanks to a penalty on 52 minutes in a half that descended into a disjointed affair.

That left Habana with not very many opportunities to claim the record and with just over 10 minutes remaining; he was replaced by Jan Serfontein to conclude his evening.

Argentina then dominated the ball for the final parts of the game and eventually their determination paid off when Orlandi snuck over.

Sanchez ended the tournament on 97 points – four ahead of Pollard – as he knocked over the conversion to the delight of the Argentina supporters, but ultimately it was the Boks who finished with bronze.