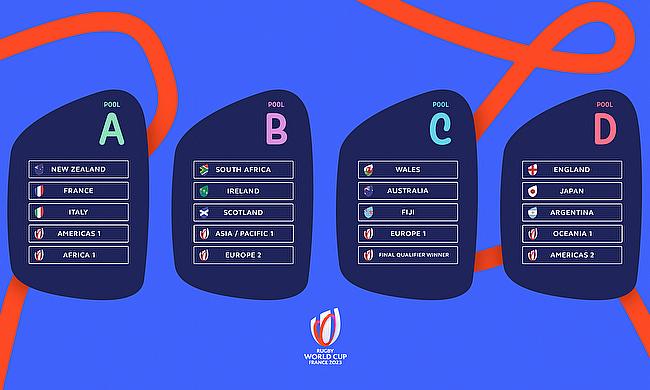 I felt incredibly well looked after during my playing days - Conor O’Shea
England to lock horns with Australia and South Africa in November series next year
England not underestimating France ahead of Autumn Nations Cup final
Eddie Jones: Everyone wants to play beautiful rugby and we are no different

England will face Argentina and Japan in Pool D at the 2023 Rugby World Cup.

Eddie Jones' side will meet Los Pumas again after facing them in the 2019 World Cup whilst Scotland and Ireland will also renew acquaintances having been drawn together in Pool B. The two nations will be joined by world champions, South Africa.

Meanwhile, the hosts, France, will come up against New Zealand and Italy in Pool A with Wales taking on Australia and Fiji in the group stage for the third consecutive tournament.

Only 12 teams have qualified for the World Cup so far, with eight qualifiers to be finalised by November 2022 and the draw seedings were based on world rankings from January this year due to the coronavirus pandemic.

The tournament is set to begin on September 8th and will take place across 10 French cities. The full tournament fixture list will be announced at the end of February 2021.

"It's a great pool to be a part of"@englandrugby's @owen_faz reflects on England being drawn in Pool D with Japan and Argentina at Rugby World Cup 2023 #RWC2023 pic.twitter.com/FVPkeiYh8V

World Rugby Chairman Bill Beaumont said: "COVID-19 might stop us from travelling but it can't stop the excitement building towards France 2023 - this is where it starts.

"There could be no better place than France to celebrate the 200th anniversary of our game in 2023. France knows better than most the power of sport to bring a country to together.

"In a challenging time, this tournament represents a positive and exciting time for everyone."

"There is nothing better than a Rugby World Cup draw to get the juices flowing!

"We now know where the journey is heading to, but there are a few gaps on that journey that need to be filled in because of COVID, but what we do know for sure is that the Six Nations will carry on being played and we will get to play Scotland a couple of times again.

"With the Lions tour, what an opportunity for the Scots and the Irish boys to put their hands up during this Six Nations and get on that tour and learn about what it is like to take the world champions on in their own back yard. There is nothing more exciting for a player than that.

"We have a tour a year out from the World Cup to New Zealand which is a three Test tour which is going to be a massive challenge for us, but it is the type of challenge which we would want going into a World Cup year.

"There is an excitement when you see the draw and you think ahead to Paris in three years’ time. Then there is the reality of who you are going to play against. It is probably the toughest pool on current world rankings because all three teams are in the top eight in the world which means it is going to be very competitive.

"Every four years, the World Cup gets bigger and bigger for our sport so that is something to look forward to. We obviously have big tournaments with the Six Nations so the short-term focus is there, but there is that long-term focus on developing a squad and a team that can play its best rugby in 2023.

"Hopefully, we will also have a number of players involved [with the British and Irish Lions tour to South Africa] who will get some insight into how to take on South Africa and the strategies that would be deployed during that tour.

"Getting to play Test rugby against South Africa would be a great experience for our players. If a group of Scotland or Ireland players get to play against the Springboks and maybe get to find a way of beating them, it could be very helpful for us as individual nations."

"It is a similar pool but in another country! We are certainly very excited. I have certainly got an affinity there having coached Fiji when I prepared them for 2007 so it does now give us a real focal point. With Australia and with Dave [Rennie] there, it is going to be a big challenge.

"There is a lot of experience there [in Wales' squad] in terms of players who have played against Fiji and Australia. We had Stephen Jones who joined the party at the last World Cup so we will have that experience as well, but we are all three new set-ups really. In terms of Wales at the moment, we are building depth and we did that during the Autumn Nations Cup by using 11 debutants so we are certainly looking forward to rolling our sleeves up and getting into the Six Nations."