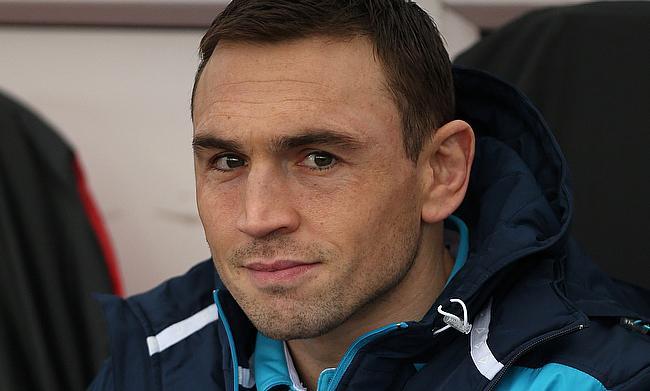 Fuelled by the professionalism of rugby union following the 1995 World Cup, plenty in rugby league took notice of the 15-a-side code as it began to establish itself as an elite sport.

Quickly the likes of John Bentley, Alan Tait, Andy Craig, Scott Quinnell and Dai Yong made their way back to rugby union, but it wasn’t just players who switched sides.

The same could be said for coaches and it cannot be denied that union has been aided hugely from this crossing of codes and sharing of knowledge between the two sports.

Mike Ford was one of the first to make his way to rugby union, as did Andy Farrell (Ireland head coach) - who initially moved across as a player - whilst Shaun Edwards has achieved an almost legendary status as a defence coach.

In March, Edwards credited his late mother for telling him to learn more about rugby union: "Back in the mid-1990s, she was the first person to tell me to study rugby union as well as rugby league because I always wanted to be a coach and I always took notes of what coaches said," Edwards said.

"When rugby union went professional in 1995, I was at the top of the league game, captain of Wigan who were world champions, but she always told me to learn about rugby union. That's one of the reasons I ended up coaching Wasps and Wales.”

The latest rugby league stalwart to cross codes is Leicester Tigers’ new defence coach Kevin Sinfield. Replacing the aforementioned Ford, the 41-year-old arrives in the East Midlands hoping to instil the winning mentality that he experienced with Leeds Rhinos for well over two decades.

As a player, the England and Great Britain international picked up seven Super League crowns, three World Cup Challenges and two Challenge Cups. He also guided the team to another Challenge Cup triumph during his spell as Director of Rugby. There is only one way to describe Sinfield; a winner.

In the last 10 years, Leicester have won an LV Cup, an Anglo-Welsh Cup and a Premiership title. Contrast this to the previous 10 years, where those in green, red and white lifted the Premiership five times, two Heineken Cups and an EDF Energy Cup.

In a recent interview with Sky Sports, Sinfield explained what he hoped to bring from his time with Leeds to Mattioli Woods Welford Road as Steve Borthwick continues to make the Tigers roar once more: "I always thought it's important you have something to hang your hat on and throughout my years here [at Leeds] as a player I always thought we had three key ingredients.

"One was humility. We won a lot of trophies, but we never stopped wanting to improve or get better. We always had time for people, and we always wanted to help each other and I thought that was really important.

"We always worked hard and set high standards - that's a given - and I can remember after we'd won things some of the pre-seasons were brutal, how hard we worked and what we expected from each other.

"And then the big thing: We always put the team first. That meant at times we were uncomfortable, or you had to cop it yourself or were out or dropped.

“But you wanted to be a good team-mate, put the team first and realise sometimes your own personal agenda, pride, selfishness couldn't go in front of the team, and I reckon we lost that for a couple of years."

Sinfield joins a growing list of established rugby league names who have all made an impact in rugby union.

In an interview with TRU, former Hull FC boss Lee Radford (who was also due to embark upon a new journey in rugby union with Dallas Jackals before the team decided not to compete in the 2021 MLR season) mentioned the likes of Dave Ellis, Clive Griffiths, Mike Forshaw, Paul Deacon, Sean Long and Martin Gleeson as names who have enjoyed levels of success in the 15-a-side game, with the latter now England's new attack coach.

Following his move to Rhinos after a stint coaching Harlequins, Long expressed that he felt that attack in rugby union could still benefit from league, specifically citing simple execution and soft hands whilst he believed short passing could improve.

Ironically, these are skills that the likes of George Ford and Owen Farrell excel in and the pair both firmly have their roots in league. Regardless of that fact, each has a wealth of knowledge and when Ford is put up for media duties for either Leicester or England, you always come away feeling as though you have learnt something.

Before England’s Six Nations clash with Ireland in March, the 28-year-old not only said how his first thought is always to run at the opposition, but he also described the balance of attack in the England side and why in some cases kicking was essential.

Perhaps one of the small delights in Sinfield’s appointment at Leicester is that the changing of the guard is not all that significant as both he and Ford hail from the same collection of villages and hamlets in far west Lancashire.

Saddleworth sits with the Pennine’s hanging over it, the debate surrounding whether or not the parish belongs to the red rose or the white rose still raging on. It is a debate that is ever-present on the badge of the rugby league team that sits at the heart of the community.

?? “As a Club we want our players to play international rugby and that principle doesn’t change for our staff. We wish him... all the best with this exciting new opportunity."#OnceAWasphttps://t.co/TFa4kwJvwW

Saddleworth Rangers was the club where Ford and his two brothers first picked up a rugby ball and league has naturally had a significant influence on the family.

This is something that Joe Ford spoke about to TRU before the 2020/21 Championship season, the quotes unreleased at the time, but underlining the relevance of the 13-man code to its sister game: “Rugby league is really good at getting to a certain position on the pitch and then they will count numbers either side. For example, if it is a six openside, they will know they have got them if you are in the shape you should be in.

“It is all rugby league. Obviously it is a different game, but a lot of it comes from rugby league, manipulating the defence, so then you are just basically counting numbers and if it is a certain number, you know you have got them and you have just got to execute your play then.

“It sounds more complicated than it is, but it isn’t. It is basically getting to an area on a pitch and then you count numbers and one way or another you will have them and if you don’t, you kick the ball back and then you wait for a poor kick so that you can get them.

“That is probably a reason why England have been so successful because you look at the background of the two ball players in George and Owen. They have both got brought up in rugby league until they were teenagers, but their academy sides were in rugby league, so you can see why it works so well for England when they play together.

“I ended up at Bradford and George ended up at Wigan in the end, which are both less than an hour from Oldham and then you played your local rugby at Saddleworth Rangers which has had some good players come through there."

Sinfield has had something of a leading role with the parish’s rugby league team, coaching his son's age group for several years and Jack (Sinfield's son) recently followed in his father’s footsteps by signing for the Rhinos.

"He never has to tell anyone to do something he wouldn't do himself."

Steve Borthwick reveals why Ellis Genge was selected as @LeicesterTigers captain and considers what Kevin Sinfield will bring to the team.#GallagherPrem pic.twitter.com/Xdvq3VHWMl

Nolan Tupaea, Jake Thewlis and George Hough have also signed professional deals this summer and have all had the benefits of Sinfield’s tutelage.

Club graduates such as Mark Flanagan and James and Joe Greenwood have also played in Challenge Cup finals and battled for Super League titles in recent years.

There seems to be a mysticism surrounding Sinfield. His time in the yellow and blue of Leeds and his time with Leicester could not have started better and his journey with the Tigers began with a 34-19 win over Exeter Chiefs at Mattioli Woods Welford Road last Saturday.

Holding the visitors to 20-5 at the halfway point, by the final whistle, Leicester had made 156 tackles with the team’s effort levels were through the roof.

Borthwick has always valued hard work and clearly in Sinfield, he has found a like-minded individual. Playing Gloucester on Friday night at Kingsholm will undoubtedly be a challenge, the adverse nature of 'The Shed' alone enough to make opposition players quiver.

Inherently, that win against Exeter was just the beginning of this journey and Sinfield’s influence will be seen more and more as the months go on, but as starts go, last weekend was another example of rugby league's impact on rugby union.